The past two years have been a whirlwind for Miss Sydnee Hawkins, as she has involved herself in almost every aspect of music and performing that the Hopkins County community has to offer. Sydnee knew she wanted to be a singer by age 3, and she really began to work toward that goal during her high school career at SSISD, making choices that have expanded her natural abilities and furthered her experience as a vocalist. Now on the threshold of starting college, Sydnee shared some of her impressions during the KSST Good Morning Show with Enola Gay. 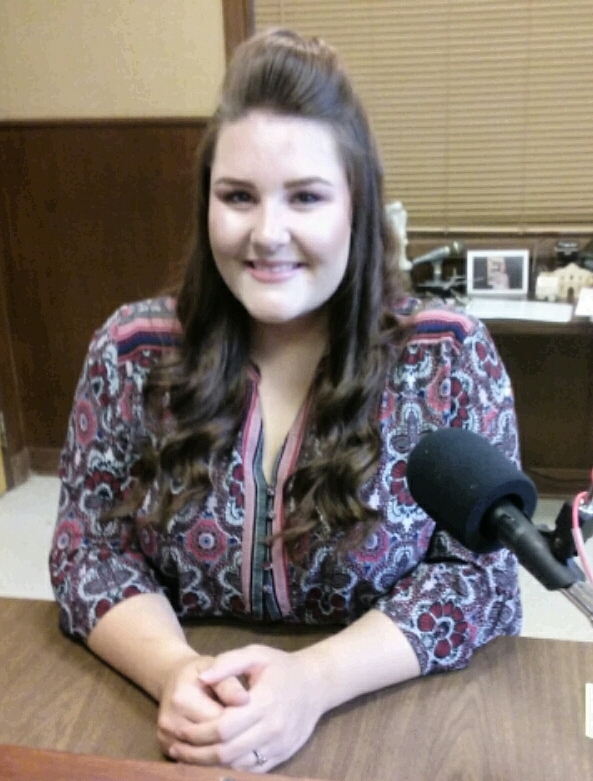 Her mom was her first teacher. With a mother who loved to sing, it was natural that Sydnee learn to harmonize with her, and singing with her mom remains one of her greatest joys and simplest pleasures. Sydnee also loves to dance, act and play piano. Carol Allen, Director of the Northeast Texas Choral Society and Dawn Doyle Jones, former Theatre Arts Director, along with LeShay Woodard and Desi Pharris, currently at SSHS, remain helpful mentors. Amanda Thompson Brandenburg coached her in voice, tap and drama in Shining Star Productions.  Roger Reed brought her onstage at the Reilly Springs Jamboree for her first experience singing with a live band. Kevin and Juli Wooley of Haystack Youth Choir remain friends and travel-mates, allowing Sydnee the opportunity to sing the National Anthem and perform in New York City and at Disneyworld during their summer choir trips.  Monica Lancaster provided vocal coaching and Cathy Cobb has provided piano lessons. Further broadening her appreciation for music performance have been Mr. McCauley, Mrs. Welch and all the  High School and Middle School band and choir instructors in Sulphur Springs. Shannon Oaks Church pastors Eric Godwin and Jonathan McGraw remain instrumental along her path of musical expression. Earlier this month, Sydnee performed “At Last” for the  open auditions of American Idol held at Gilmer, Texas. She was a top-ten pick and was rewarded with a “front-of-line” pass to the Shreveport auditions during the Labor Day weekend. Good luck, Sydnee!  She begins basic classes at Paris Junior College this Fall and is enjoying the company of her family including three younger sisters whom she hopes learn to love singing as much as she does!  Find out more about Sydnee and see her YouTube videos at sydneelynnhawkinsmusic.com