Wildcats Football Coach Greg Owens had a lot to talk about on KSST and Channel 18 TV Saturday Morning Coach’s Show after Friday night’s 49-21 win at Pine Tree. He said after the Wildcats fell behind the Pirates, 14-0 in the first quarter, the defense made some adjustments that helped slow Pine Tree down.

He praised the play of defensive linemen Cameron Cooks and D’Ideric Dugan who put a relentless pass rush on the Pirates’ quarterback. Defensive lineman Haven Tennison made a solid play on a goal line stand fourth down play that turned the ball over on downs. Coach Owens also praised the play of corner Terrell Turman. He said after the defense adjusted, the offense began to pour on the points.

Receiver Tyrese Peters was able to play for the first time after a season and a half of injuries and he scored three touchdowns the first three times he touched the ball. Quarterback Ryan Humphries completed 15 of 19 passes for 326 yards and five touchdowns and he also had a long run for a score. Coach Owens called Humphries extremely consistent. He also praised the offensive line for maintaining their blocks. Linemen Gideon Gregory and Richard Green had excellent games according to Coach Owens. He also liked the hard running of backs Searn Rodgers and Lawrence Worth. The coach also liked the pooch kicking of Angel Tavera.

The win put the Wildcats in a three-way tie for first place with Texas High and Hallsville. Coach Owens said one of the team’s goals is to return to the playoffs. The Marshall Mavericks come to Gerald Prim Stadium this Friday. They are 0-1 in district play after losing to Texas High. Their season record is 1-4 but Coach Owens cautioned that the Mavericks have played a very rough schedule. They have Cameron Haller back on offense. He’s the district’s leader rusher. Coach Owens called Haller the best athlete in the district and an exceptional player. He added Marshall lost a lot of players off last year’s team due to graduation. After last week’s district loss, Coach Owens expects Marshall to come into Friday’s game desperate for a win. 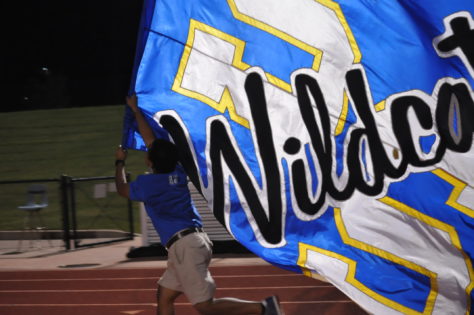