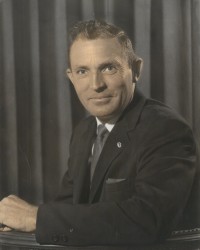 Cleo passed away on Monday, December 7, 2015 at Hopkins County Memorial Hospital.  He served in the U.S. Marines during World War II, was a member of the Oddfellow Lodge and then retired from the Carnation Milk Plant and Yellow Freight in Dallas.

He was preceded in death by his parents; one son, Robert Tolleson, one brother, James Tolleson and one sister, Patsy Burton.

Memorials can be made to the Sulphur Springs Veterans Memorial on the square.