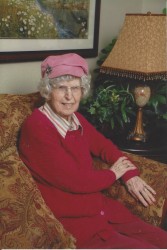 Murlene June Miller Gibbons Glaspey passed away Sunday, November 8, 2015 at Carriage House Manor. The only child of Merrel Cleo and Jewel Veazey Miller, she was born June 3, 1931 in Dike, Texas. Her mother passed away when Murlene was only a small child. Her father then married Ruby Mae Christian who became the mother who raised, cared for and loved Murlene as her own. Although not blood related, they were certainly mother and daughter to each other.  Murlene married A. J. Gibbons on October 18, 1947. He preceded her in death on November 16, 1981. On February 16, 1985, she married Claude E. Glaspey. He passed away on May 15, 2004. Murlene was an extraordinarily talented seamstress and spent her entire career in the women’s apparel industry, including many years with clothing designers as a pattern and sample maker. She was a member of the Davis Street Baptist Church. She is survived by her son David Gibbons and his partner, Mark Wilson of Garland, Texas.

A special and heartfelt thanks to the many professionals who cared for Murlene during her last days, including Hopkins County Memorial Hospital ICU and Third Floor staff, Legacy Hospice, Carriage House Manor and particularly Dr. Horn and Dr. Balkcom.

In lieu of flowers, memorials should be made to Meal-A-Day Program, 150 MLK Blvd, Sulphur Springs, Texas 75482.