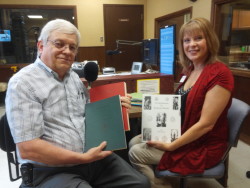 James Terry, KSST Radio “night man” is also a coin collector, and has been since 1991. He first got an interest in “numismatics” through a science-teacher colleague, George Lacey, at Princeton ISD. Through coin clubs he belongs to, James gained access to a number of out-of-print books about coin and medal collecting which the clubs needed to dispose of. He approached Hope Cain, director of SS Public Library, to see if she would like these books for her “special collection” and she said “Yes!”. There are 13 reference volumes that will soon be available for library patrons with an interest in coin collecting. James Terry holds membership in two coin organizations, and currently serves as Chairman of the Board of Governors and Directors of Numismatics International, which has chapters in 30-plus countries and is headquartered in Dallas, Texas.