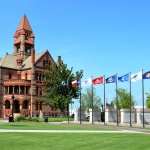 Monday morning in the 8th Judicial District Courtroom in the Hopkins County Courthouse, a jury panel began hearing testimony from witnesses in the trial of Jarrod Arnold Smith. Smith, 41, is being tried on three counts of aggravated assault with a deadly weapon. According to Hopkins County Criminal Investigator Lewis Tatum, Smith is on trial for shooting a man in the chest with 45 caliber pistol. The incident occurred in the Pine Forest community.

According to District Attorney Will Ramsay, Smith was charged in 2012 with aggravated assault for holding a gun to his then wife’s head.  That charge ended in a mistrial. He did not fire the weapon as stated in a previous story here. In the 90’s, he was placed on probation for beating a female about the head with the butt of a long gun.