Approximately 50 persons took advantage of the opportunity over lunch Wednesday to hear an update directly from State Rep. Bryan Slaton and State Senator Bob Hall regarding the recent 87th Texas Legislature sessions, during a Lunch and Learn meeting. The town hall meeting on Sept. 15, 2021 was sponsored by the Hopkins County Chamber of Commerce, with Atmos Energy and Oncor as contributing sponsors, at Sulphur Springs Country Club. Chamber CEO Butch Burney introduced the lawmakers to the audience.

Rep. Slaton noted that while “nothing’s been normal in 2021” – lawmakers have spent 8-9 months in Austin instead of  just weeks in two special sessions so far and a third special session planned– some good has come out of the recent cessions, with some of it COVID- related. 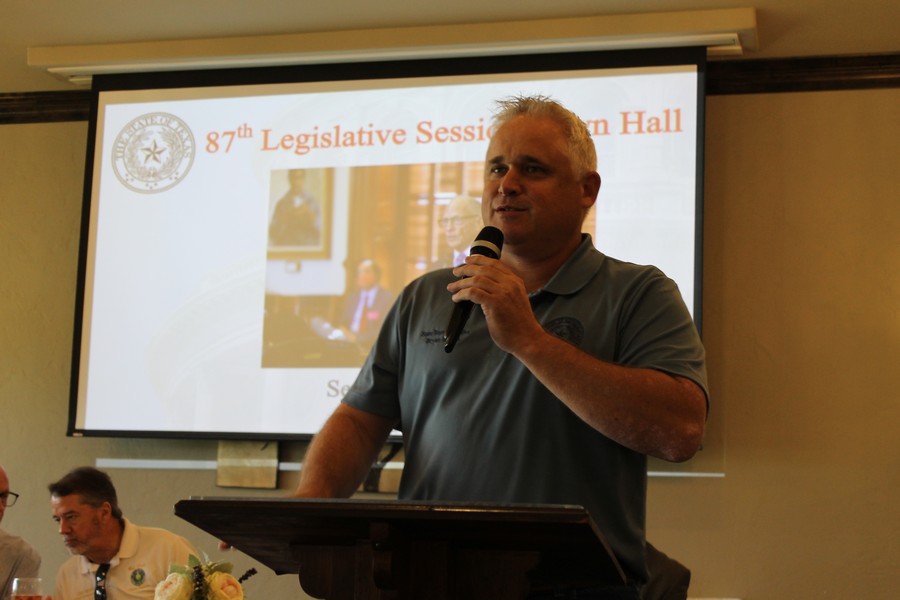 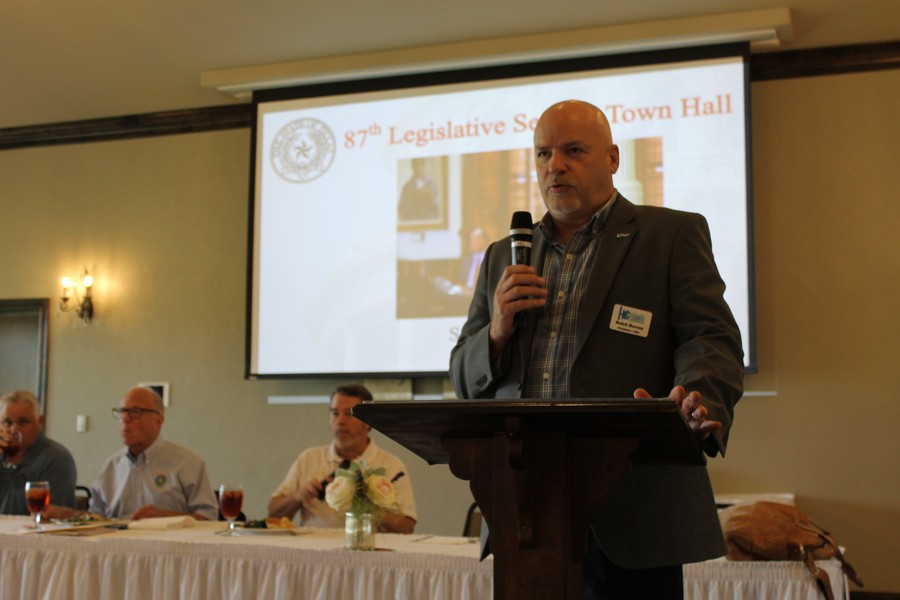 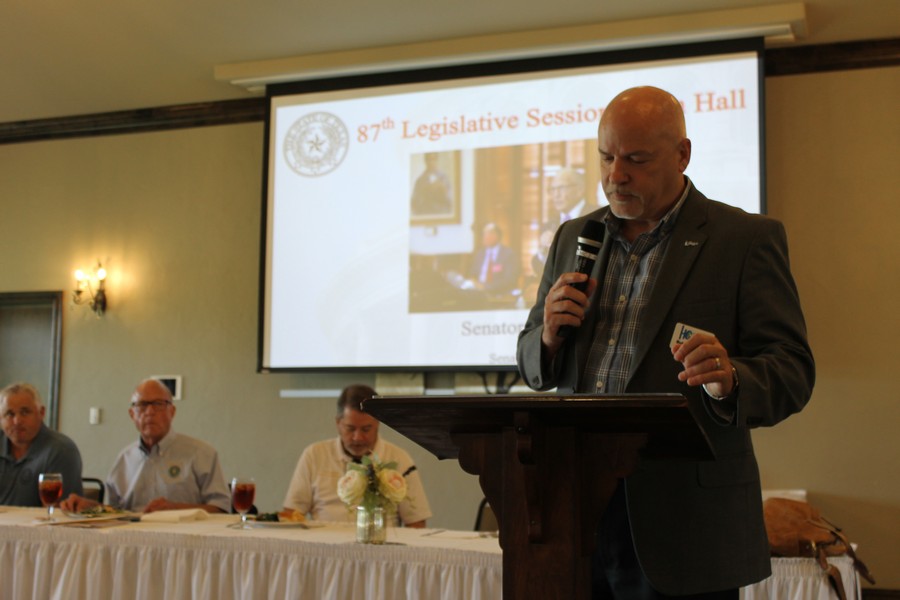 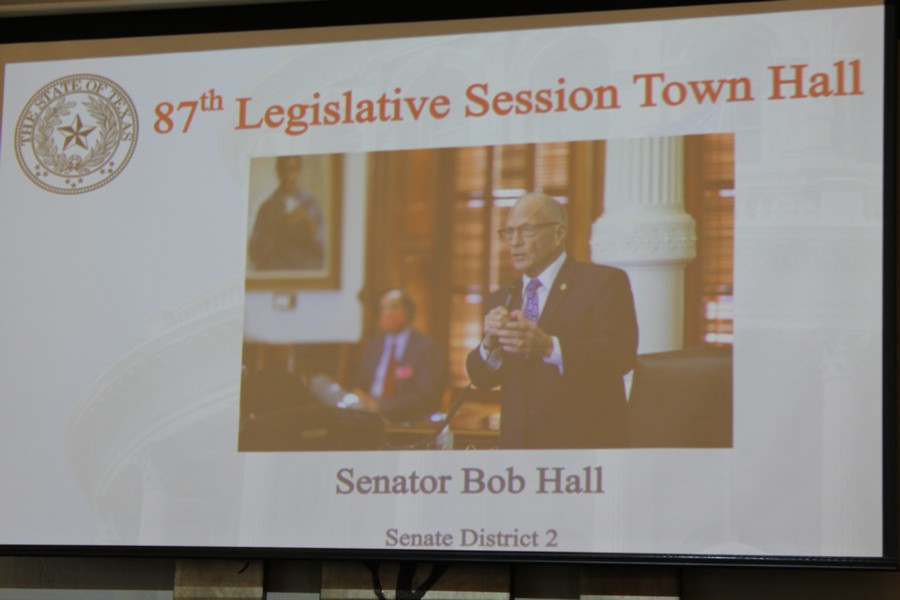 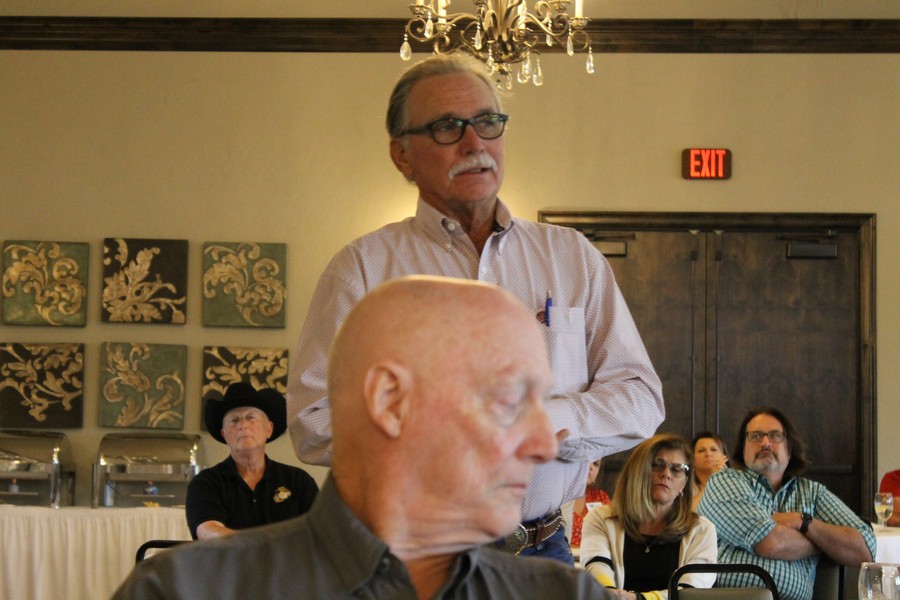 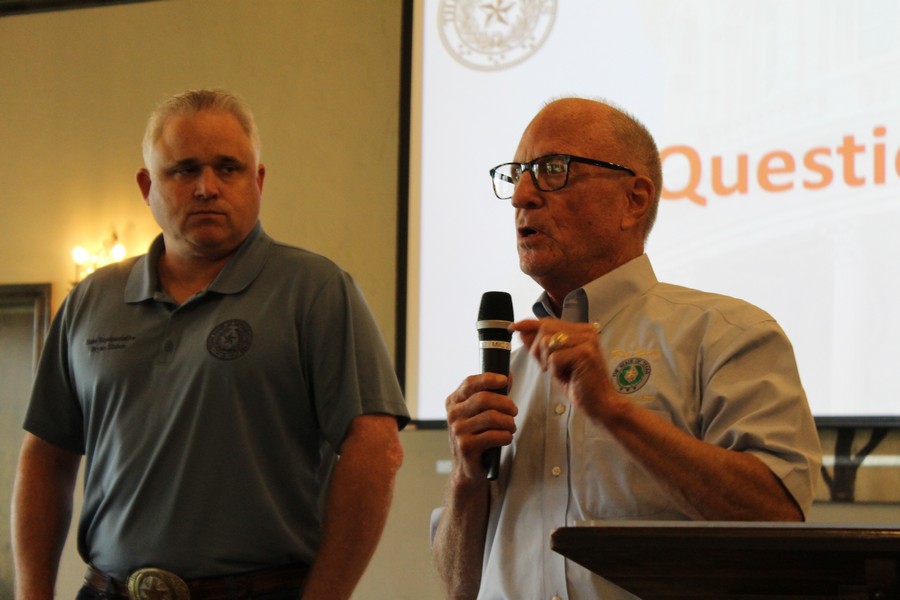 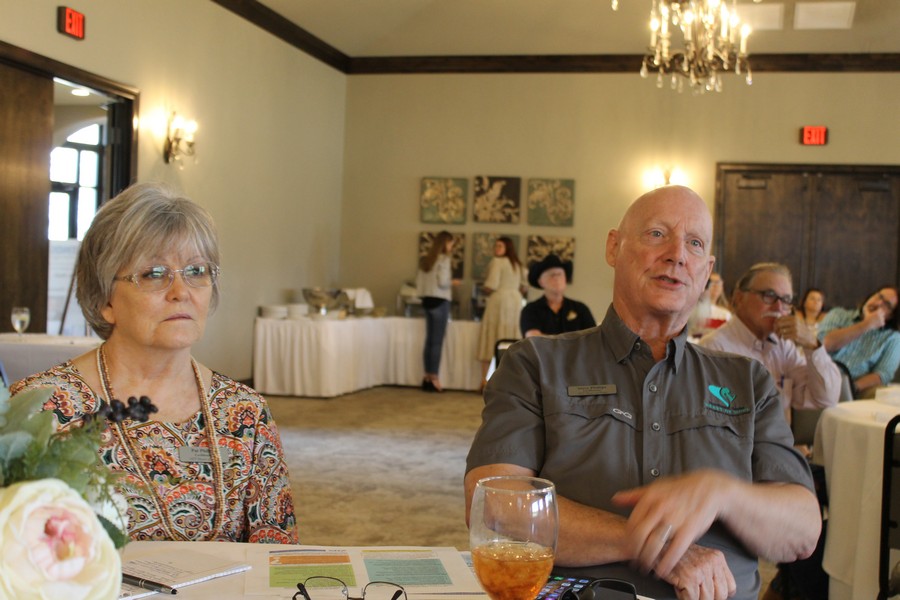 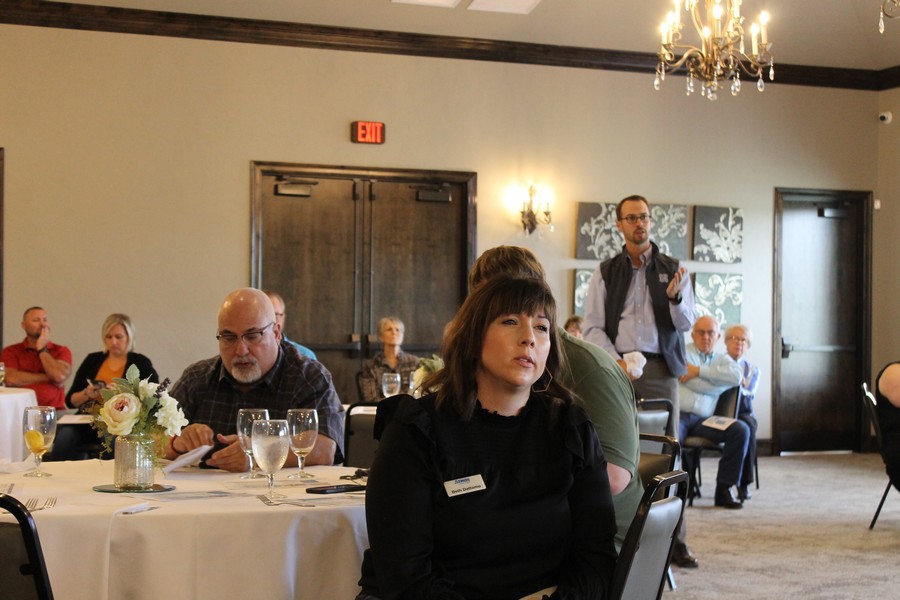 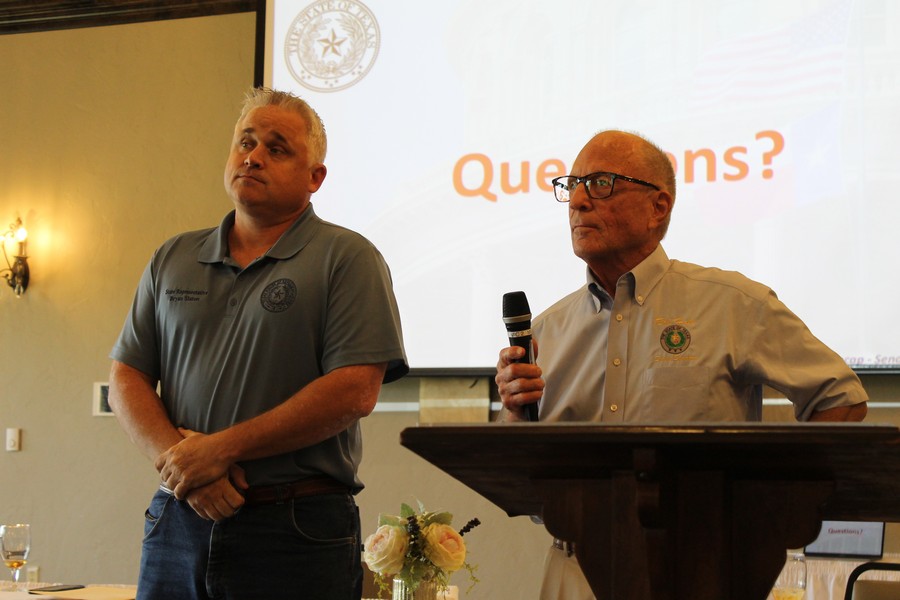 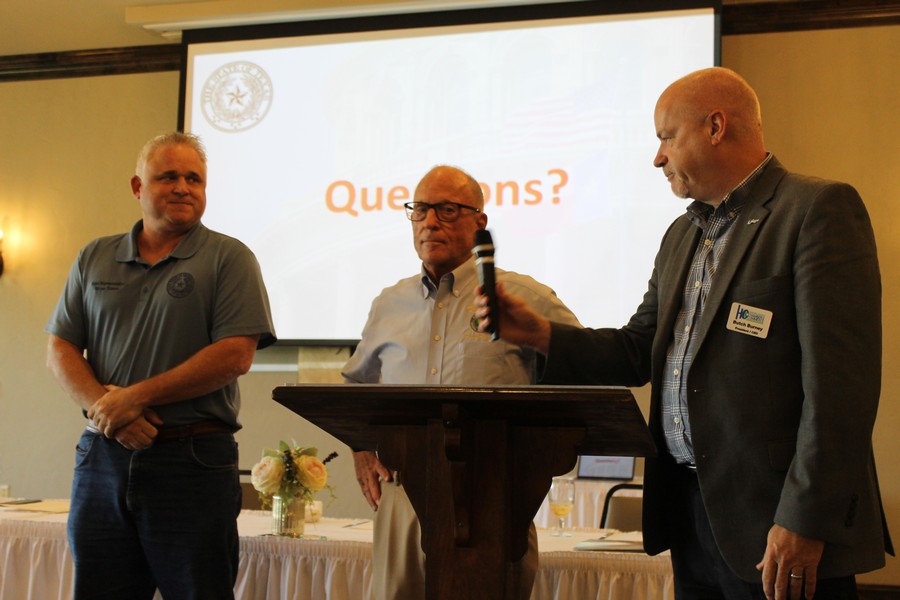 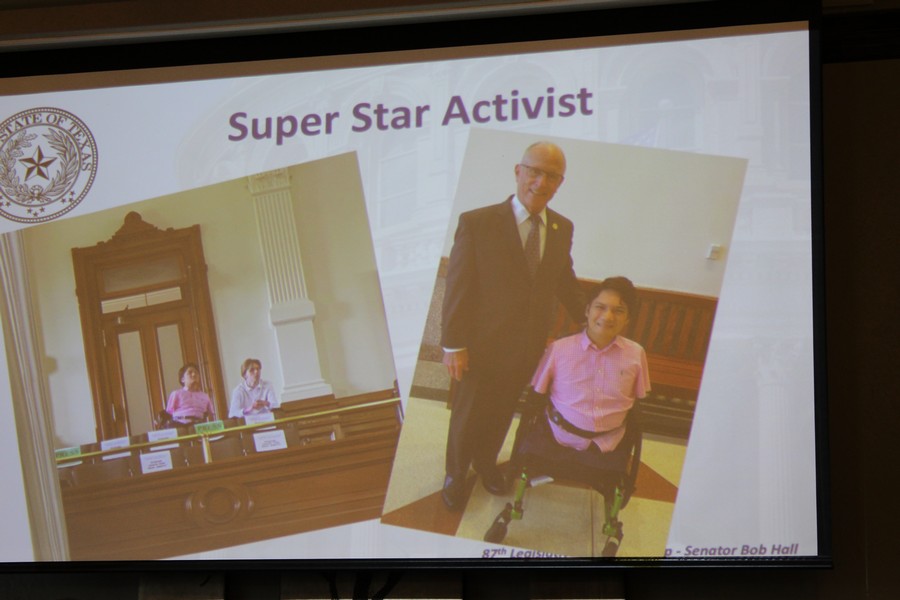 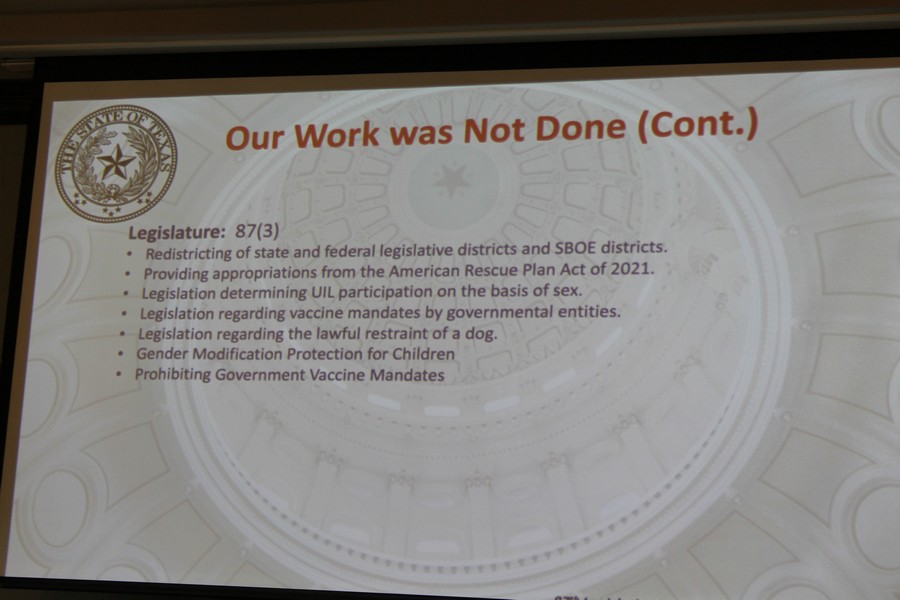 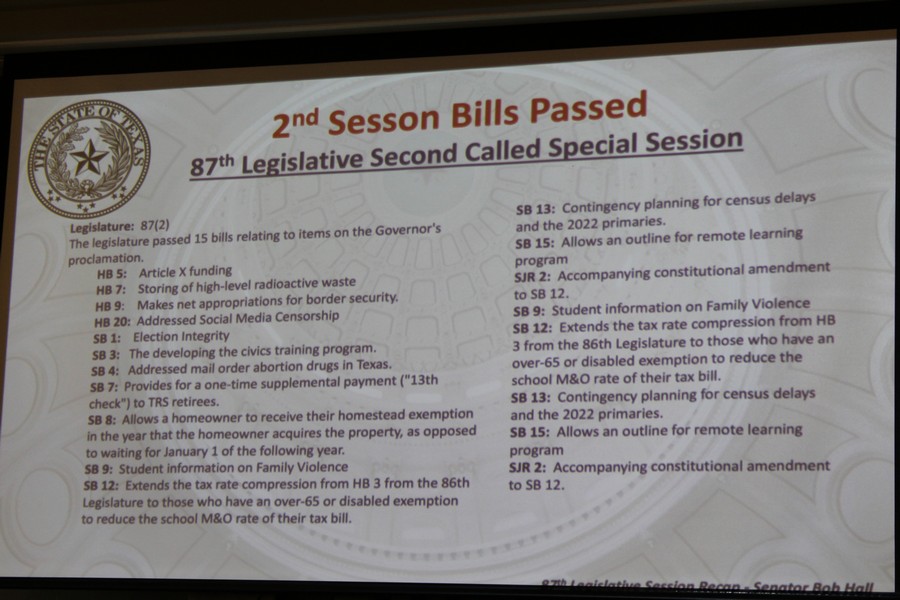 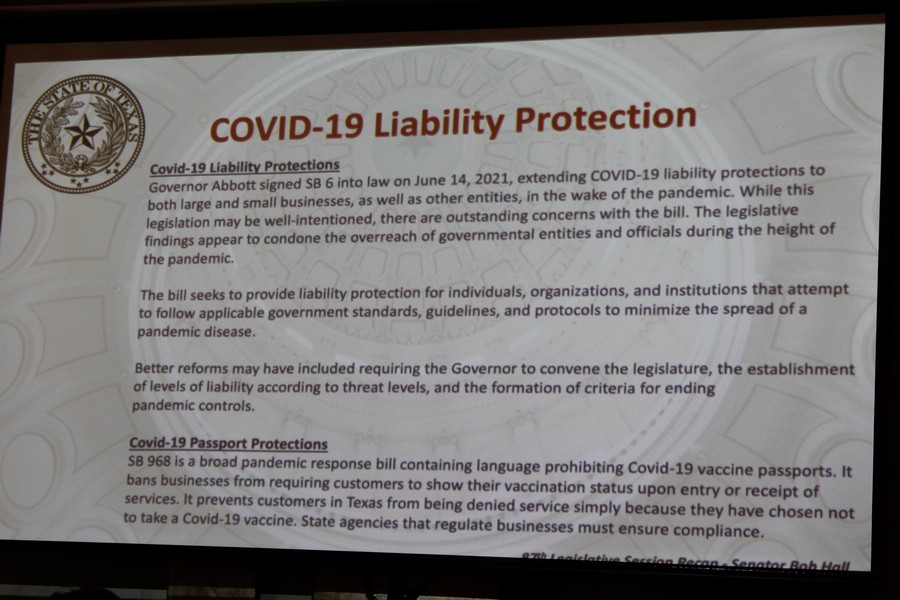 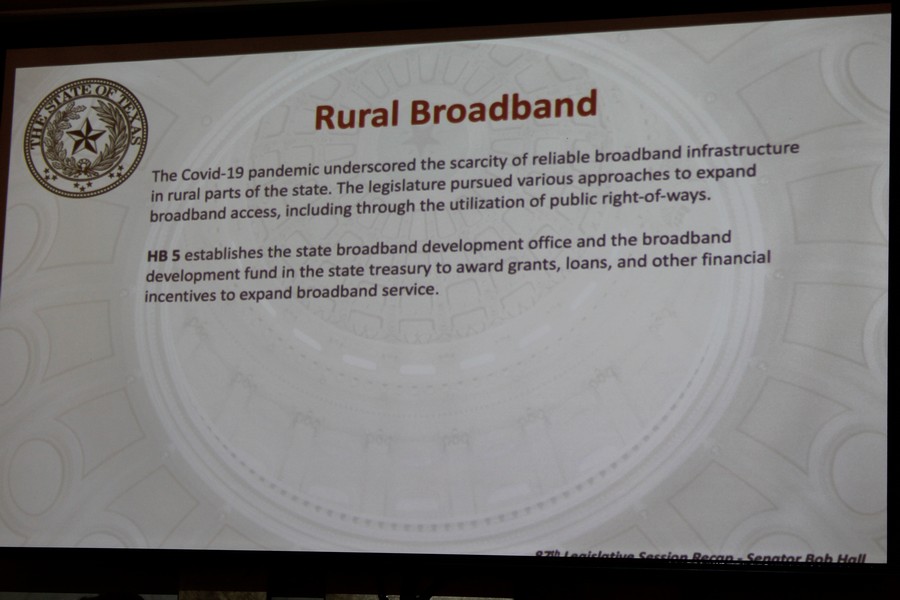 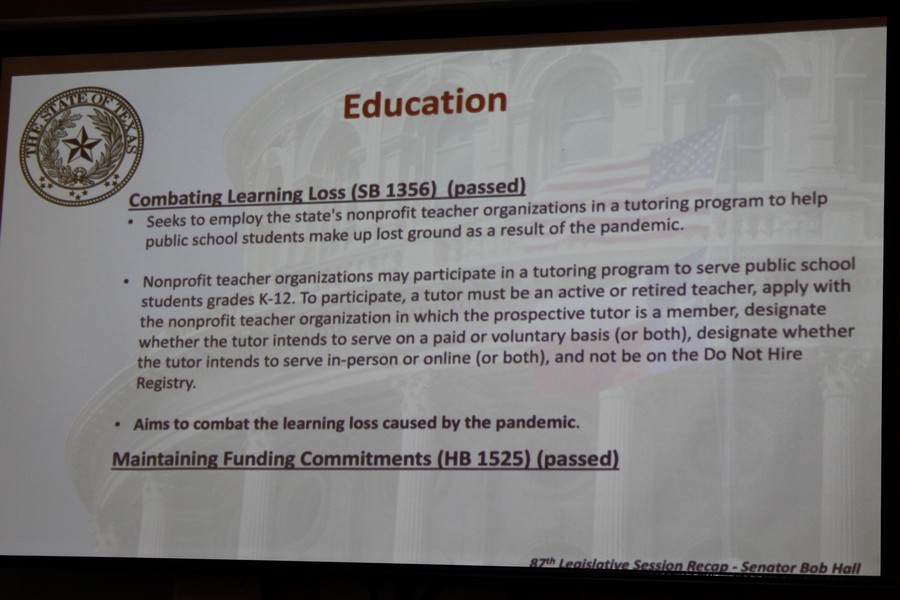 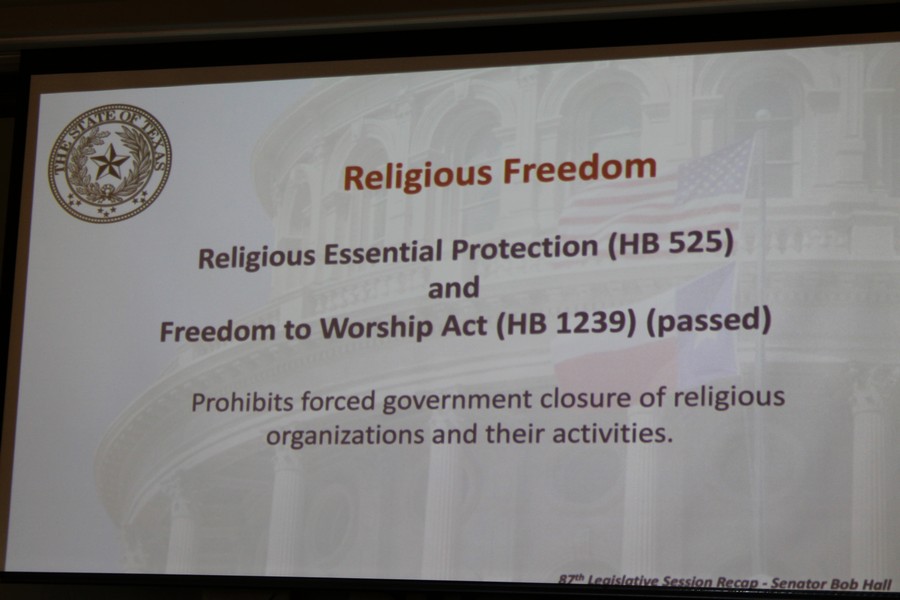 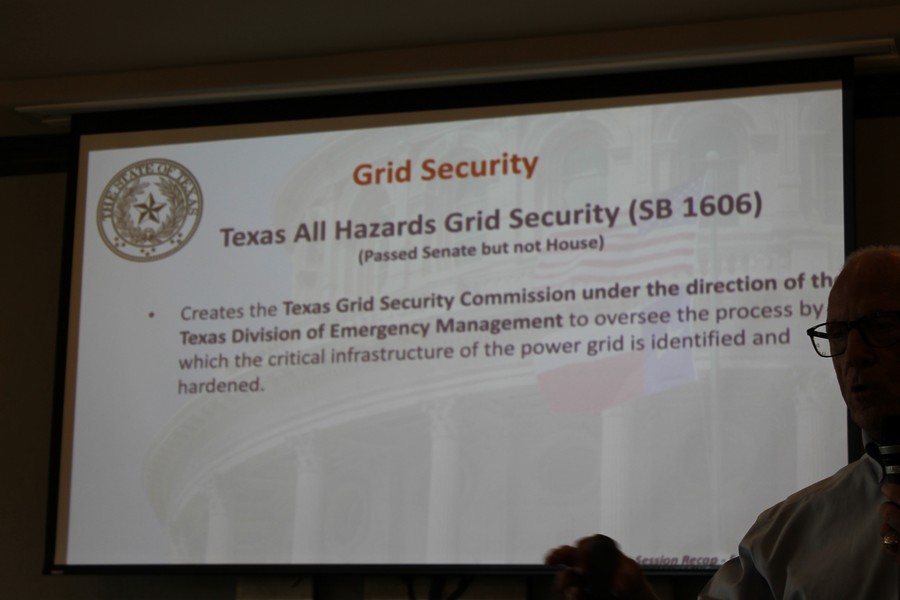 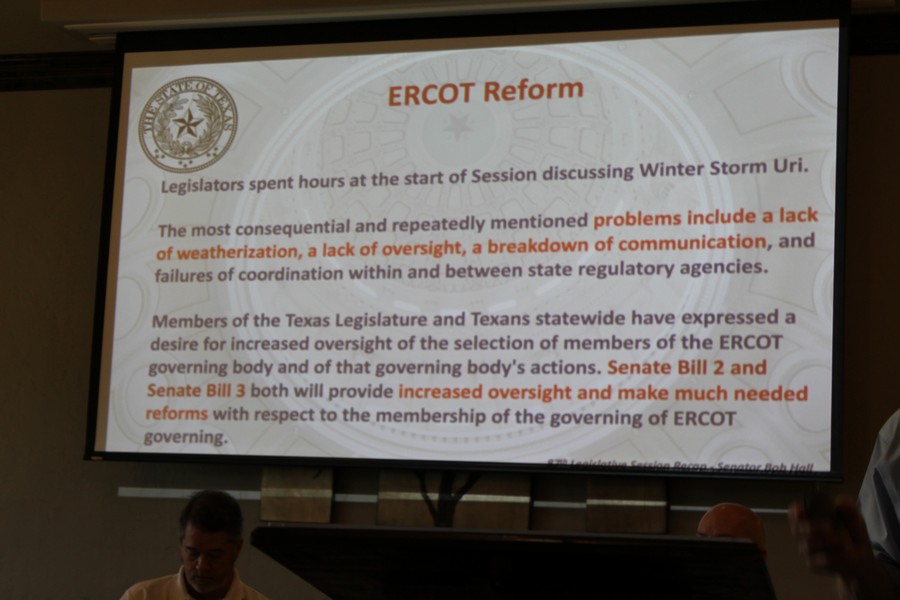 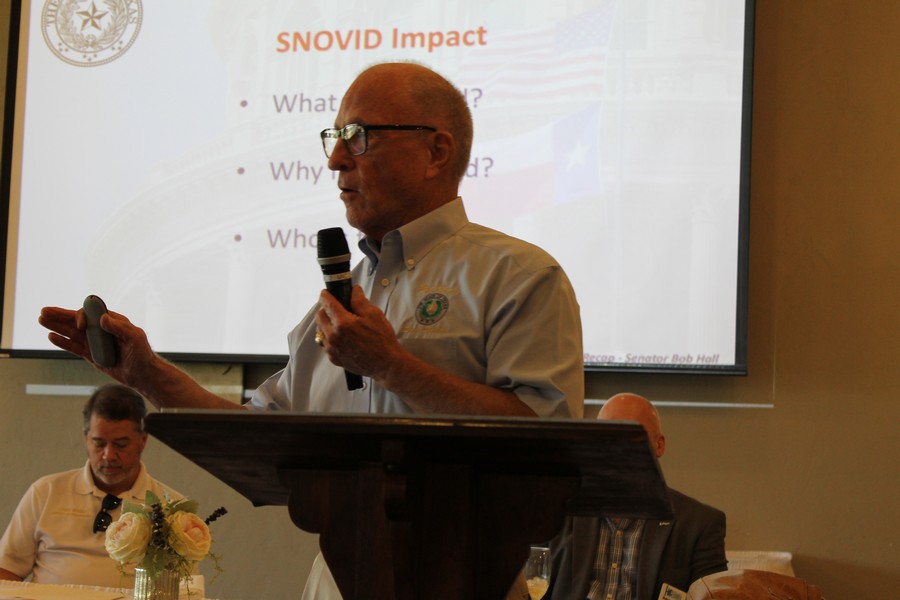 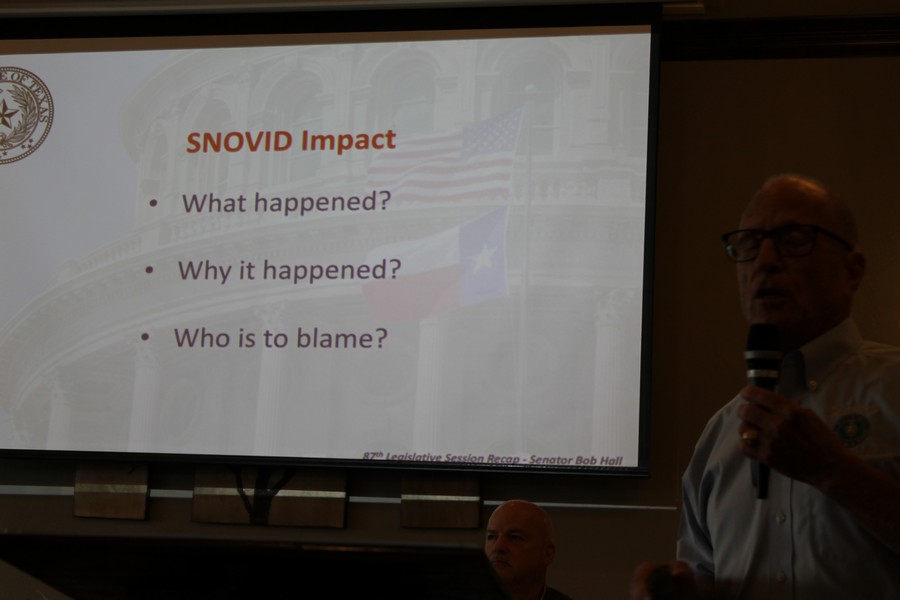 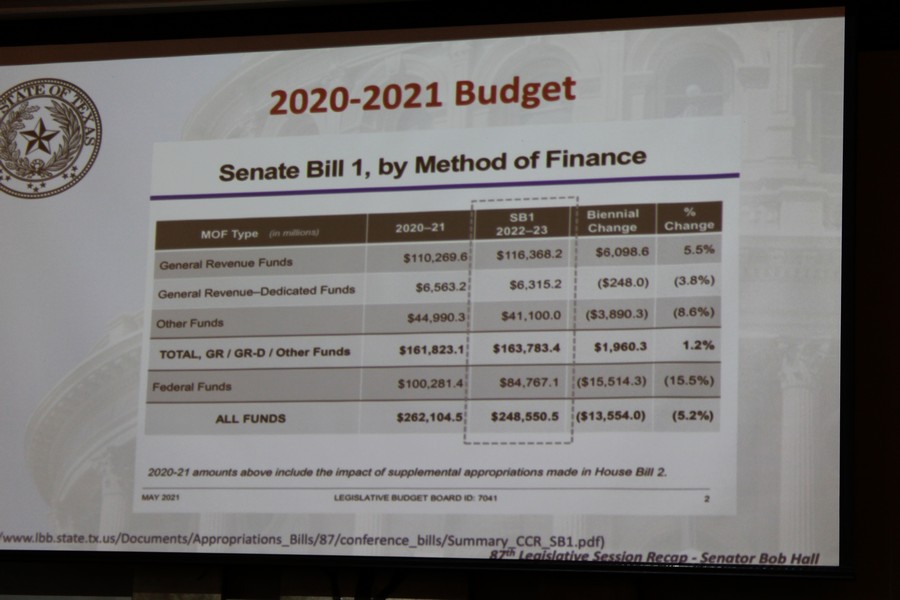 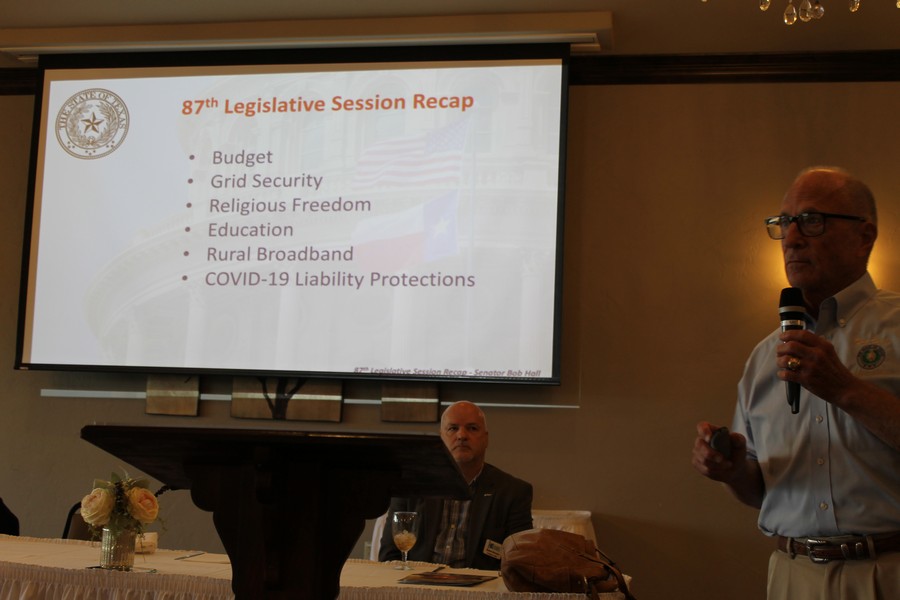 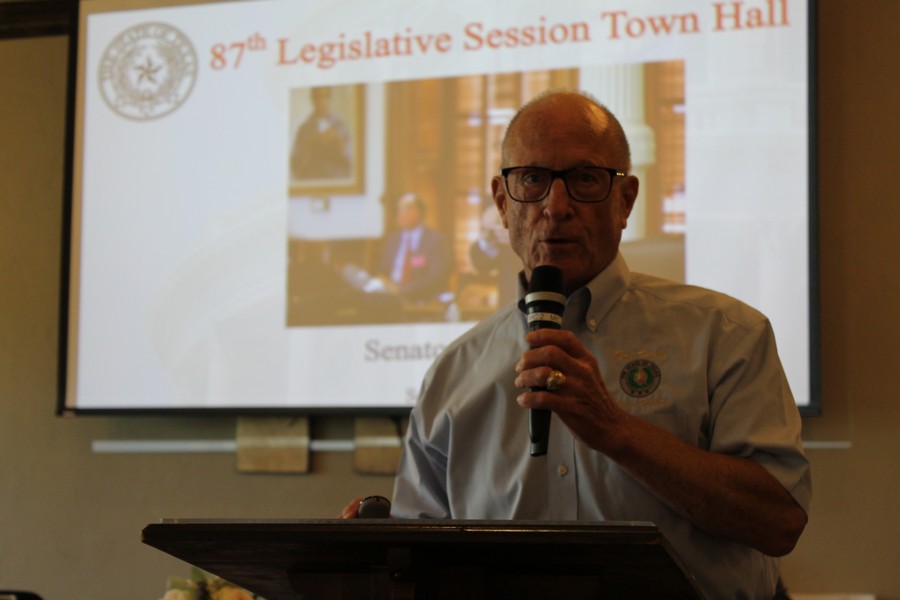 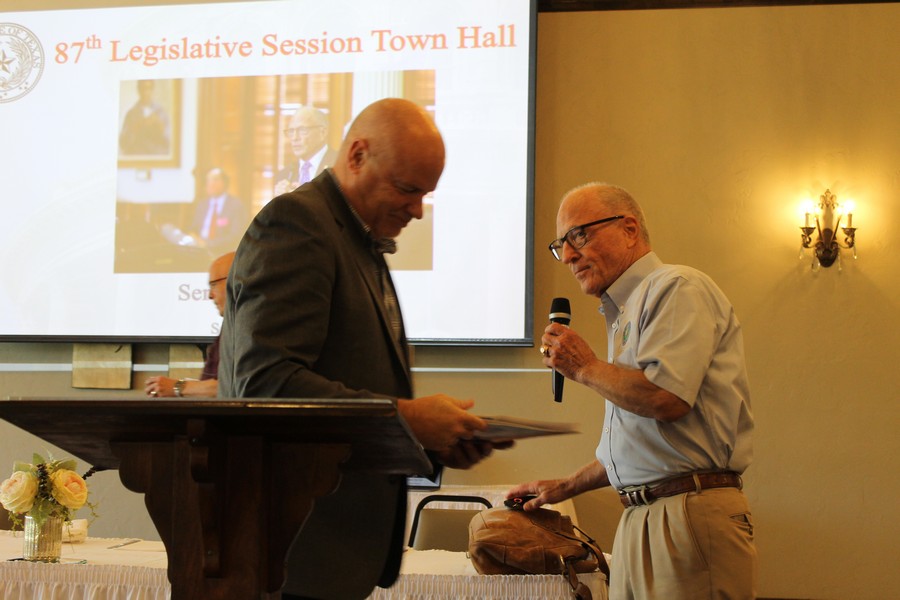 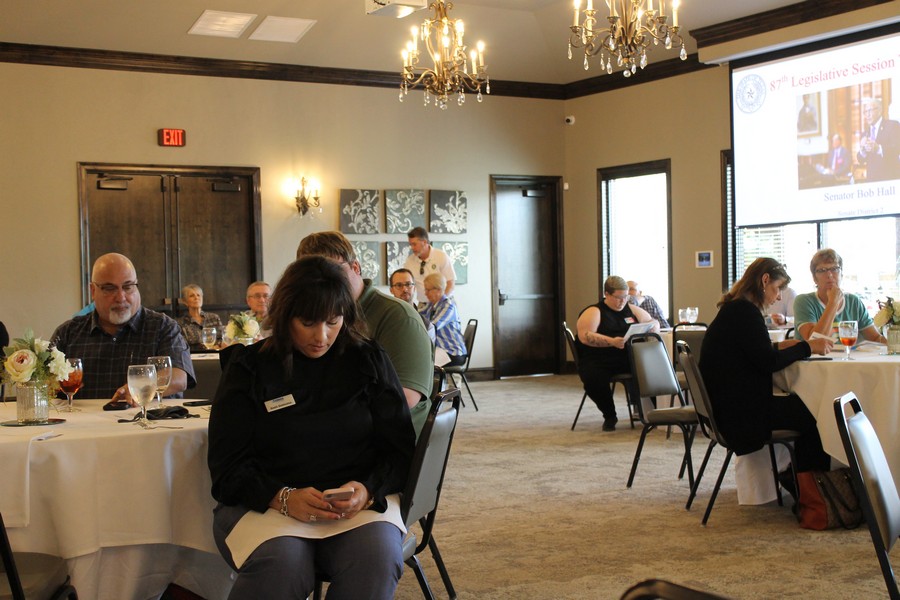 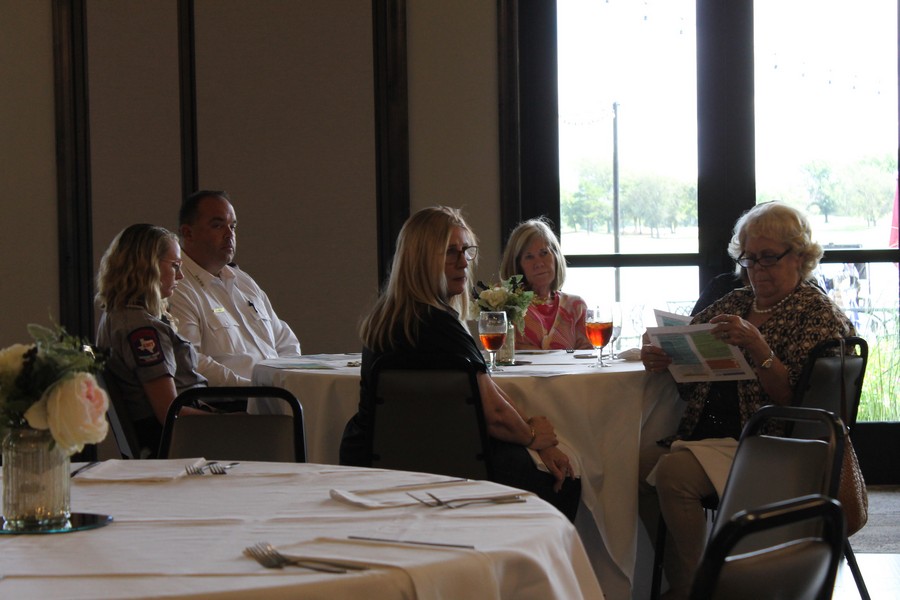 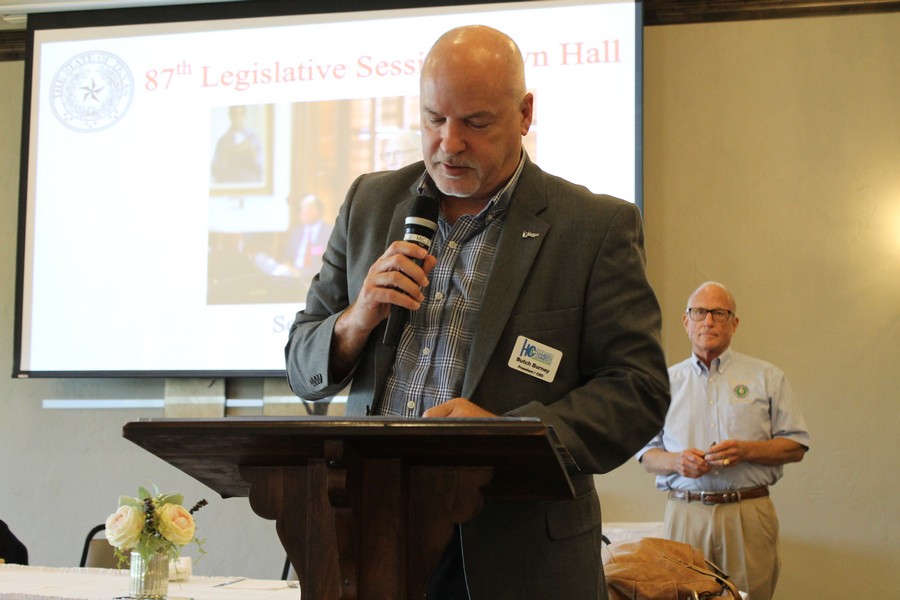 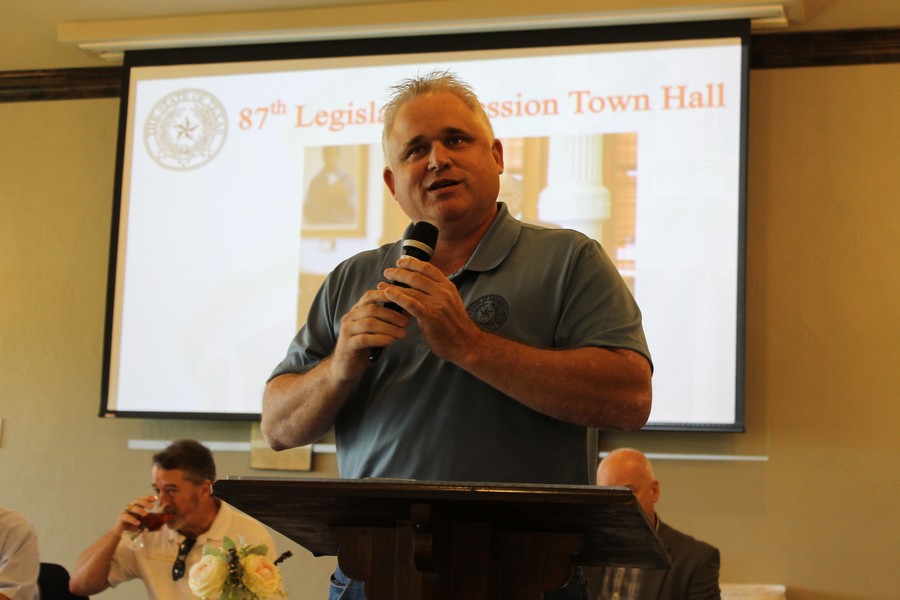 Both Hall and Slaton explained how their prior backgrounds have aided them in their service to District 2, and both talked about topics that related to the COVID-19 pandemic.

Rep. Slaton used his background in ministry – attending seminary and 13 years as a minister before earning a BA in business/accounting from the University of North Texas – to offer an option for constituents of District 2 whose family members were cloistered in nursing homes according to state orders as a preventive measure during the first part of the 2020 COVID pandemic. This included many nursing home residents so isolated in the imposed shelter that they died without comfort of their family around them.

Realizing that ministers were excepted from the visitation ban, Slaton began encouraging laymen facing the ban to become ministers, specifically “a member of religious counsel.” That is now law, Slaton said. He believes allowing nursing facility residents to see family members gives them a moral boost, which in turn improves their health.

Both Slaton and Hall emphasized strongly their belief that religious services are essential, a freedom that must be upheld.

Another pandemic-related problem involved school children having to be schooled at home for months without adequate access, and in many rural communities no access, to Internet service and technology to be able to access their lessons posted online.

Slaton said he filed an amendment to the Rural Broadband bill months ahead of other legislation, but as a freshman legislator, had little voice. His attention, however, did help bring private schools to the top of the list for assistance.

Election security and redistricting too were addressed during the recent sessions.

Slaton said he had a hand in the “Election Integrity” bill, calling for the Secretary of State to make random audits of all counties. That would involve making two lists, one for those with a population of less than 300,000 and a separate list of those with over 300,000 residents. This is pitched as a means to try to determine whether election fraud and illegal voting are being carried out in the 254 counties, and if so, how. Proving and prosecuting election fraud continues to prove a challenge, according to Slaton.

Hall too touted Election Integrity or Election Security as an accomplishment of the 87th Legislature. Passed in the second session, the congressman said the bill was much stronger than the one that did not get passed in the first session. He said the added features will “make it easier to vote and harder to cheat.” No barriers or difficulties to voters were raised with it’s passage. Previously, few penalties existed for voter cheating, even with evidence. The District 2 Congressman noted that with 254 different processes across the state, ensuring election security will continue to be a big job.

Slaton during the lunch session reported that redistricting of representative seats will be considered every 10 years, following the census, in the future.

Some notable things District 2 Senator Bob Hall remarked on from this year’s sessions included the state budget, and reform initiated as a result of SNOVID 2021.

Hall said the Texas budget is as large as it’s size and setting it is a huge undertaking. This year, for instance the budget was reduced from $262 billion to $248 billion. He pointed out that if Texas were a separate country, budget-wise, it would be the 7th largest in the world. He believes a lot of our budget allocations are wasted.

“Snovid,” Hall said, showed the state’s power grid system hasn’t been properly protected during his term, and officials needs to do better. Electrical power cannot be stored, like water in a tank, Hall said. Should Texas’ power grid totally go down it would take months to rebuild. He attributed the state’s policies toward power generation to the power shut downs during Snovid, not wind or solar power. Those existing policies limited our gas-related industries, forcing them to operate at less than maximum, instead of helping the dire situation during those February days. Actually, the state came within seconds of a Blackstart, that is, losing the entire power grid during a disaster to the point it would have to be rebuilt from scratch, according to Hall.

Resulting from this year’s session and discussions are Legislative action which Hall considers successes. These include ERCOT Reform with a complete annual audit of the Public Utility Commission (PUC), and in education, counseling and tutoring initiatives to help schools and students recover from ‘the lost year’, or the months of instruction lost due to school closures and forced distance-learning during the COVID-19 pandemic. Hall noted that while the measure likely won’t be enough to boost the the past couple of years’ juniors and seniors to pre-pandemic levels, it should help younger students catch up.

While both elected officials were glad to be part of some of the change affected by the regular and special Legislative session, they too supported and filed other bills that didn’t make it out of session. In fact, only 1 in every 5 or 6 of the 7,000-plus bills filed were passed in the first regular session.

Hall noted a few of those other proposed bills he supported or filed included:

At the conclusion of the hour-long Lunch and Learn, a few questions were posed by members of the audience and answered in brief form before the pair of lawmakers were off to another destination in the state.