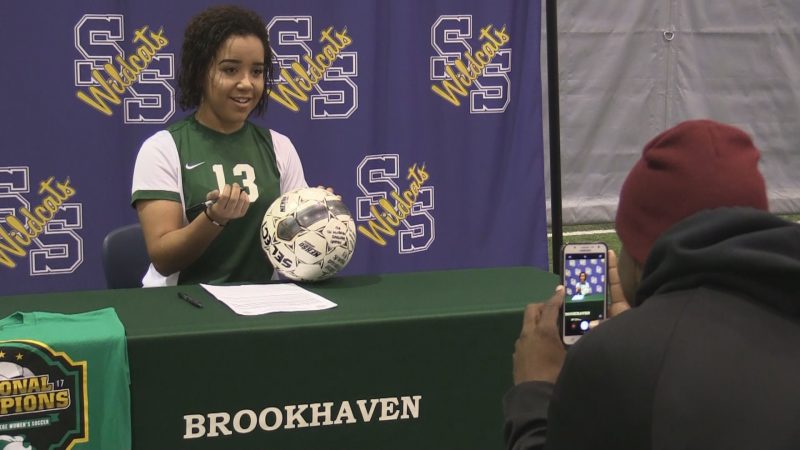 Mileena Zirretta, a four year starter and prolific goal scorer for the Lady Cats’ soccer team, signed a letter of intent Tuesday (February 6) to play soccer at Brookhaven College in Farmers Branch near Dallas. Zirretta said she noticed that Brookhaven had a very good soccer program and she decided she wanted to go there. She said she expects to play right away as a forward. Zirretta said she visited the school and even participated in a workout at Brookhaven. She said she likes the coaching staff. Zirretta said a rival of Brookhaven is Richland College and she said she also considered them before selecting Brookhaven. She said she wants to take her basics at the Division 3 Junior College and then transfer to a four year school to study sports medicine. Robert Williams, an assistant coach at Brookhaven, attended the signing event Tuesday morning. He said he watched Zirretta play in a showcase in McKinney. Coach Williams called her a stud and said she convinced him that she was a player Brookhaven needed to sign. He said Brookhaven will be losing their top striker after this season. Coach Williams said Zirretta has all the attributes to become Brookhaven’s next top striker. He said he likes her physicality, her speed and the way she strikes the ball hard. Zirretta is joining a top notch program. Brookhaven is currently ranked #1 in the country. Coach Williams said last year the Lady Bears won their conference, their region and the national tournament in New York. Brookhaven’s head coach is Jimmy Elder. Coach Williams said Coach Elder found the program in bad shape three years ago but has dramatically turned things around. Zirretta’s high school coach Joel Bailey said Mileena has all the attributes of a finisher. He said she has speed, strength and technical ability. Coach Bailey said every district coaches’ game plan includes thoughts of the Lady Cats #13, Zirretta. He said she can make an immediate impact at the college level.