Lynn Turner is a Korean War-era Veteran and has made Sulphur Springs his home for the past 30-plus years. He joined the Navy in 1951 and after boot camp, was assigned to Photography School in Washington, D.C.  During that training period, he met and married the love of his life, Alene.  Ten days later he shipped out, ending up at Guam. In fact, most of his military career was spent there as the lone photographer for MCB-10, a “Seabees” construction unit assigned with building military personnel housing units. Lynn remained in the Navy for four years until his honorable discharge when the Korean crisis came to an end.  Then, he and Alene enrolled at Harding College where they began to build careers in education and administration.  Lynn became a public school superintendent and later a professor at Texas A and M Commerce. Many former students will remember Mrs. Turner’s Social Studies classes at Sulphur Springs High School prior to her retirement. Lynn and Alene will celebrate their 65th wedding anniversary next year. But for Lynn, one of the highlights of 2017 has been his recent trip on the Honor Flight to Washington D.C. for a truly memorable American experience.

Judy Rawson Heaps of Sulphur Springs serves as a group leader who helps arrange travel on the Honor Flights for NE Texas veterans. Lynn gives her credit for identifying him as a military vet and suggesting the trip. Along with a group from the Metroplex, he was able to make the whirlwind 2-day trip along with his trip guardian, his nephew David Simpson. Upon arrival in the nation’s capitol, the group viewed the WWII, Korean and Vietnam War Memorials then attended a dinner complete with a flag ceremony by an honor guard representing every branch of the service  and received special recognition by Pentagon officials. At Arlington Cemetery the next day, they observed the rows upon rows of crosses, watched the changing of the guard at the Tomb of the Unknown Soldier and visited the grave of Texas’ own Audie Murphy, the most decorated soldier of WWII. The tour also included the Navy Memorial downtown D.C. and an overview of the Coast Guard and US Marine Corps Memorials. A special big band concert was staged for them, ending with a vocalists’ version of God Bless America that still brings tears to his eyes when he recounts the experience. The trip reached an memorable conclusion when a group of about 300 friends, family and strangers were present to welcome them back at Love Field.

Lynn Turner is an humble man who says that because he was not a combat veteran, he did not personally step forward for the Honor Flight, in order to reserve that privilege for military veterans who served in combat situations on foreign soils. Judy Heaps and the Honor Flight group has changed that, and he is very pleased with the memories he now has the cherish. He and Alene hope to make one more trip to Washington, D.C. to celebrate their wedding anniversary under the cherry blossoms near the Capitol where they first met in 1953. This weekend, they will attend at least one of the local Veteran’s Day Celebrations. Lynn is proud to have served his country and that he lives in a wonderful community with such an impressive Veteran’s Memorial, where the flags still fly for freedom every day. 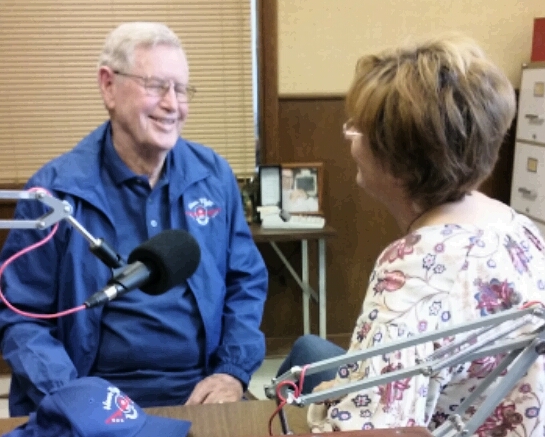