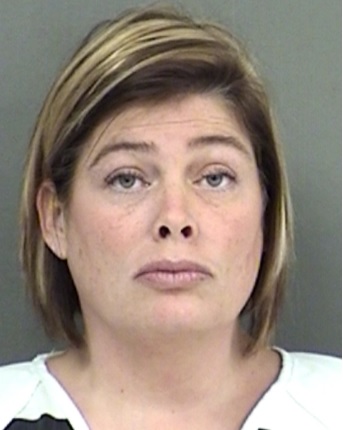 At 6:41 a.m. Wednesday, November 08, 2017, Kristi Lynn Hooten, 40, of Sulphur Springs, was arrested for theft of property. Her arrest followed a lengthy investigation by the Hopkins County Sheriff’s Office. Hooten, an insurance agent who operated Connect Insurance Agency, 101 Bill Bradford Road, was selling insurance, creating fake auto insurance cards but is not providing  the auto insurance coverage. She had been keeping the insurance premiums for herself.

According to Investigator Wade Sheets with the Hopkins County Sheriff’s office, a local resident needed to file an insurance claim and after being “given the run around”, reported the lack of success to the Sheriff’s office. It was found that Hooten used legitimate companies and policy numbers that looked normal to scam customers. Sheets said the insurance cards looked like a typical auto insurance card. He noted that if the fake insurance card was to be verified by law enforcement during a traffic stop, it would have returned “verify manually” which would tell the officer it was not on file with the state. However, the officer would verify by a look at the insurance card and it would have been accepted due to the “perfect copy” of a typical card.

Additional information is surfacing in this story. In an email from a ksstradio.com reader, “My parents were scammed by her and it was manufactured home insurance policy she sold to them. Their house burned down last year 3 days before Christmas in Dike, Tx and it was then that a claim needed to be filed since there was still $53,000 left on the mortgage. Since my parents got a new home, they have been paying two mortgages because of this scam by Mrs. Hooten. I hope everyone who bought a policy from her contacts the Detective to make sure they have coverage.”

Connect Insurance Agency, 101 Bill Bradford Road is now closed. The investigation is on-going and anyone who purchased insurance from Hooten and Connect Insurance Agency should contact Investigator Wade Sheets on his direct line 903-558-0027. Sheets said she did not scam everyone but there are those who may be affected and not know it.

Hooten was charged with Theft of Property more than $2500 but less than $30,000, a State Jail Felony. However more charges could be added as the investigation