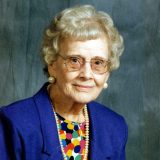 Mrs. Virginia Holley, age 96 of Winnsboro, passed away on Monday, June 26th, 2017 in Winnsboro, TX. She was born on January, 1 1921 in Princetown, Ohio to the late Edwin R. Howey and Pearl Shafer Howey. Mrs. Holley was a retired secretary and was a member of First United Methodist Church of Winnsboro.

She is survived by, sisters, Luella Ray of Edmond, OK and Betty Smith of Ft. Myers, Fl; sister-in-law June Price of Greenville.

In lieu of flowers donations may be made to the First United Methodist Church or the Gilbreath Memorial Library.