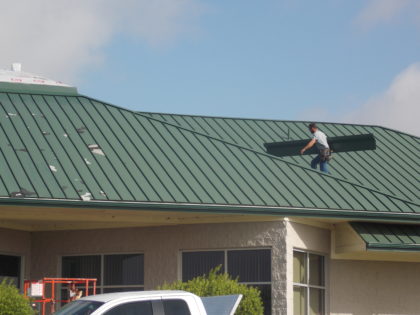 Repair to the Sulphur Springs Municipal Airport (Aerodrome) Terminal is underway. The $16,000 repair/replacement is a response to damage caused by high wind and tornado like activity in May, 2015.

When the storm occurred city crews reacted quickly in restoring the roof with a temporary fix. The complete repair has been delayed by insurance and other issues. The original cupola has been replaced and took some time due to a different type of cap used, according to Joey Baker Airport Manager and Tourism Director for the city. While the roof is being repaired a renovation and repair is being made to restrooms at the building. Those issues were not related to the storm.

Other work at the aerodrome includes the removal of one underground fuel tank accomplished while work is underway on the removal of the second underground tank. The self-serve fuel farm is expected to be completed Friday, September 9.