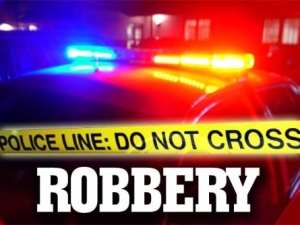 Fox stated they are studying the video and have searched the area but nothing has been found late Friday morning. The incident happening during daylight hours causes investigators believe someone driving along the south service road or Veteran’s Drive might have seen something. Fox asks anyone who might have seen anything in the area to contact Crime Stoppers or the local police department.

Fox said the two men differ in height with one tall and one short, one wearing a grey hoodie with blue shorts and the other red sweatpants with a light colored hoodie.

Almost one year ago a similar robbery occurred at the VFW Post. Fox said there are similarities but it is too early to tell if they are otherwise related in any manner. The previous robbery was within two days of being one year according to Fox.