Tuesday, August 11, 2015, 11:45am, Memorial Hospital Main Entrance,  –  The Health Care Foundation board of directors, Brian & Leesa Toliver, 2014-2015 Lights of Life Chairs, Michael McAndrew, CEO Memorial Hospital and Brent Smith, EMS Director celebrate the arrival of the new first response vehicle purchased with funds raised through the 2014-2015 Lights of Life campaign & gala.  “We strive to be good stewards of the donations we receive through the Lights of Life campaign so it’s always exciting to show our generous  donors and the community how their donations were used”, said Bob Weaver, Foundation Board Chairman.  “Brian and Leesa did an amazing job last year and through their hard work and commitment the telemedicine units are in use, the flex coils are making a difference and now with the arrival of the beautiful new suburban for EMS, hopefully Brian and Leesa can relax” continued Bob. 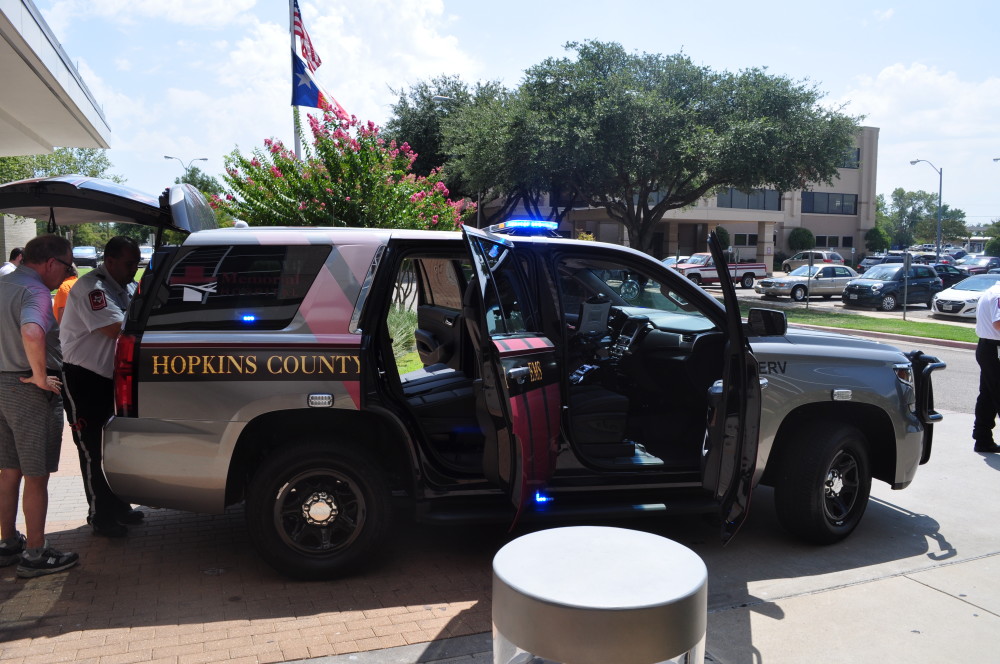 “We are excited the EMS 1st response vehicle has finally arrived” exclaimed Leesa Toliver.  “it’s a good feeling when you finally get to enjoy the fruits of your labor.  This community is so generous and we are happy to share this excitement with them” added Brian.

“We are thankful to the Health Care Foundation for their continued support of the hospital.  They remain dedicated to providing equipment that when needed has proven beneficial to the entire community” said Michael McAndrew.

“The Heath Care Foundation continues to make a difference for the community by providing equipment that makes a tremendous difference for the community.  We are grateful for the vision of the board members and their continued support” stated Brent Smith.  “We’re excited about the new 1st response vehicle and that Continued -This year the board has committed to donate funds from the campaign that will be used to purchase six CPR devices that will certainly help save lives”, continued Brent.

The funds raised from the 2014-2015 Lights of Life Campaign have been used to purchase:

“The 2015-2016 Lights of Life Campaign & Gala efforts are in full swing.  With it being the 20th anniversary of the tree lighting and the 10th anniversary of the gala, the event “sold out” even sooner this year” said Jackie Thornton, Foundation Director.  “We continued to be blessed every year by the generosity of this community”!

Gloria Mitchell, Donna Rudzik and Polly Swatsell, the 2015-2016 Lights of Life campaign & gala chairs are doing an amazing job.  With the gala already being sold out, the chairs and committee are now focusing on the mini-events that support the campaign.  “We invite the community to join us at the following events as we strive to make a difference for the hospital” added Thornton