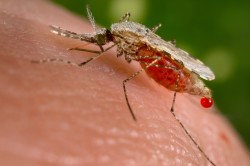 Here an Anopheles stephensi female is gorged with blood and beginning to pass unwanted liquid fractions of the blood to make room in her gut for more of the solid nutrients. “Anopheles stephensi” by Jim Gathany

This time of the year, the temperature and high humidity levels are an invitation to outdoor activities where mosquitoes can be a problem. When it comes to mosquito control devices, about the only thing that works is common sense, says a former entomologist with Texas A&M University. Meanwhile, many Texas citizens are using devices or controls costing hundreds or even thousands of dollars that may offer only marginal control or may actually draw more mosquitoes onto their property, said Dr. Jim Olson, professor of entomology with the Texas Agricultural Experiment Station in College Station. Olson’s warning comes at a time when mosquito populations are on the rise due to warm, wet weather.

It’s also a time when Texans need to heed the threat of mosquito-borne diseases such as West Nile Virus and Eastern Equine Encephalitis. Fueled by fears of mosquito-borne diseases, the market is ripe for a host of dubious mosquito control devices. “Often, the manufacturer’s game plan is to get in and make their profits and get out within two years, because it takes two years at least for the effectiveness of the devices to be researched,” Olson said. First there are the sonic repellents. Whether wristband or tabletop model, these devices emit a high frequency sound, inaudible to humans, that mimics the sound that male mosquitoes make. Only female mosquitoes that have already mated with males bite humans and animals. By nature of their mated status, female mosquitoes tend to ignore male mosquitoes during this period of their life. Good theory, Olson said, but unfortunately these devices just don’t work. The female’s lust for blood is more on her mind than avoiding males. Also female mosquitoes are only repelled by the sound of the male mosquito when they are already gorged with a blood meal. Consequently, the sonic repellent devices tend to only chase away females that aren’t prone to bite anyway. The best thing about sonic repellents is they are generally inexpensive so buyers aren’t throwing that much money away, Olson noted.

Another type of sonic device supposedly attracts insects by imitating the sound of a human heartbeat. Unfortunately for the buyer perhaps fortunately for the mosquito, the pest is not attracted by the sound of heartbeats but by the carbon dioxide and heat large mammals such as humans emit. Some sonic devices also add heat to the attractant properties and draw mosquitoes into traps. If left on, they may actually trap hundreds of mosquitoes and that’s fine, but the problem is that in wet areas, the mosquito headcount may be as much as several million individuals per acre.Another type of mosquito trap goes a step further. It uses propane to produce carbon dioxide and heat to draw the mosquitoes close enough to be sucked into a fan driven trap. Though these propane fueled devices may trap thousands of mosquitoes in a few days, there are again generally hundreds of thousands or even millions of mosquitoes an acre to deal with, thereby overwhelming the trap and its ability to effectively limit bites. A warning flag on these devices is that they come with the caveat that they must be left on 24 hours a day, seven days a week, and then the owner will only realize a lowering of mosquito numbers in four to six weeks.” With most mosquito species, weather conditions and the insect’s breeding patterns will result in a decline in four to six weeks without any intervention,” Olson said. As with the bug zappers, the propane fueled devices may actually draw more mosquitoes from long distances onto your property than can be controlled to prevent bites.The question here is will these extra mosquitoes wait to be collected by the trap or take the opportunity to feed upon the trap’s owner? “It’s probably a toss up,” Olson said. “Plus, with the fact that running the propane burner 24/7 will draw more and more mosquitoes onto your property, you’re probably not going to lessen your chances of being bitten. “What’s particularly disturbing to Olson are the pesticide misting devices now on the market. There are several models, but they generally work by emitting small puffs of the insecticides at timed intervals around a house’s perimeter. The devices are expensive, costing as much as $5,000, and their effectiveness is suspect. Worse is the amount of pesticide they release into the environment over time and the possibility of inhalation by residents and the drift of the pesticide to other properties. “It’s about the most indiscriminate, irresponsible use of a chemical control that I’ve ever seen,” Olson said.

The best ways to avoid mosquito bites are the tried and true methods. As mosquitoes are most active at night, limit evening activities when possible. When you do go outside, cover up and use proven repellents. “The DEET containing repellents are still the most effective,” Olson said, “but other products and the organic repellents will work for awhile.” Citronella candles repel mosquitoes but are most effective in enclosed patios and other confined spaces. The candles won’t work if conditions are windy. People can take several preventative measures to reduce the mosquito population on their property. “Dispose of prime breeding locations by getting rid of anything that will hold water,” Olson said. “Buckets and tin cans can fill with water and become breeding sites for mosquitoes.” For areas that have standing water and can’t be drained, mosquito dunks are a good buy. The dunks, shaped like small donuts, use a bacterially derived pesticide called Bacillus thuringiensis israelensis (Bti). Bti disrupts the life cycle of insects that lay their eggs in standing or running water. It is nontoxic to humans, amphibians, fish, crustaceans, adult insect s, flatworms and mollusks. Neither is it toxic to insect predators of the black fly, such as dragonflies. The dunks are inexpensive, can be simply dropped into the breeding pools and generally last for months. Olson had 40 years of experience researching and studying the biology, ecology, survey and management of mosquitoes and other biting insects. His career work has emphasized control of mosquitoes associated with agricultural and reclaimed wetland systems. For more information on this or any other agricultural topic please contact the Hopkins County Extension Office at 903-885-3443 or email me at [email protected]