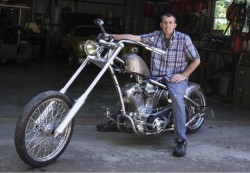 Jay Evan Landers, age 43 of Sulphur Springs passed away July 5th at his home.  He was born on January 24, 1972 in Tyler the son of Ronnie Landers and Deanna Landers.  Jay was a loving son, brother, uncle, husband and had many friends.  He married Bonnie Amanda Morehead on August 8, 2003.  She preceded him in death.

He is survived by his wife, Amber Busby and her daughters, Callie and Cassidy; his parents; grandmother, Imogene Jacobs; brother, Jon Landers and wife Amy, of Sulphur Springs; sister, Kristy Landers Moseley and husband, JP of Memphis, TN; other survivors include nieces and nephews, Kennady Moseley, Garrett Landers, Mason Moseley, Morgan Landers and many other nieces and nephews by marriage; aunts and uncles, David and Shelia Moore of Yantis; David and Charlotte Johnson of Whitehouse; Jack Landers of Sulphur Springs; Brenda Mullen of Mesquite and Bob and Janette Landers of Mesquite.