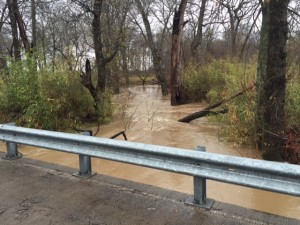 The Flash Flood Watch is in begins Tuesday morning and continues through Thursday Evening. Widespread rainfall of 2 to 4 inches with isolated higher amounts is possible.

Thunderstorms Associated with this Tropical System will be efficient rainfall producers. Excessive rainfall will lead to flash flooding and will re-aggravate river flooding.

A Flash Flood Watch means that conditions are favorable for heavy rain which may lead to flash flooding. You should monitor the latest forecasts from the National Weather Service and be prepared to take action should flash flood warnings be issued for your area.

A Tropical System will make landfall on the South Texas coast on Tuesday and move Northward through North and Central Texas by Thursday Evening. Widespread rain and thunderstorms will be capable of producing Flash Flooding and River Flooding.