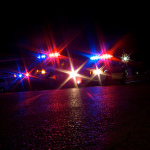 Sulphur Springs most famous pedestrian, a man known to most as Kojak, was injured in an vehicle pedestrian accident in the turn lane on Gilmer Street outside Brookshire’s in Sulphur Springs at 9:13 p.m. Sunday. The 56-year old Kojak, who real name is Dennis Lewis, was listed in stable condition at Plano Medical Hospital Monday morning.

He was taken by helicopter to the Plano hospital shortly after the accident. According to his family, Kojak has two broken ribs, a possible broken knee and lots of bruises. He suffered no head injuries and is said to be responsive and alert.

The Sulphur Springs Police Department continues to investigate the accident. Kojak can be seen almost daily walking the streets of the city all over town. His nickname is believed to have come from some members of the police department many years ago.