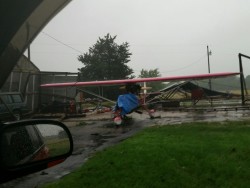 A backyard aircraft hangar is (was) located two miles north of Yantis on Hwy 154 was obliterated but the plane (a Breezy) seems undamaged.  The plane had just passed it’s annual inspection Monday morning and was tied down and covered inside the hangar.

Three of the poles to which the plane was tied were broken off at ground level and tossed around, but not far enough to take the plane with them.  The beam over the 40 foot doorway was twisted and ended up with one end underneath the tail of the plane.

The plane belongs to Ben Scarborough and Julian and Michael Robbins.