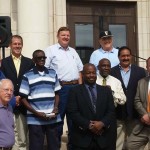 Sulphur Springs Mayor Freddie Taylor was honored on National Mayor’s Day at an event at the Senior Citizens Civic Center that April 7, 2015. Taylor, who moved to Sulphur Springs from Pennsylvania in 2000, became a member of the city council in 2004 and served his first term as mayor soon after. Taylor is in his second term as mayor of the city. Mayor Taylor encourages residents to recognize the positive impact of service in our city, to thank those who serve, and to find ways to give back to our community.

“In 2004 I ran for city council and had a great time,” Mayor Taylor said. “I stayed on long enough that the council saw fit that I could be mayor. So they elected me to be the mayor.””I didn’t really have any set reason to want to be a mayor,” Mayor Freddie Taylor said. “But the opportunity presented itself and I’ve been mayor before, so I figured that since I enjoyed it so much the first time that I would enjoy it even more. The first time I did it, I wasn’t really sure about the mayor position and how to do it and perform, but the second time around I feel more comfortable in the position.”

Since he began his first term as mayor of Sulphur Springs, Mayor Taylor has managed to work with the city to carry out good changes for Sulphur Springs. His primary targets have been roads and sewage while keeping the tax rate down.

Like any member of public office, the job is not without its complications. Mayor Taylor has faced challenges while in office, but has done his best to combat these challenges as effectively as possible.

“Prioritizing what needs to be done first is the main challenge,” Mayor Taylor said. “We hear from citizens on what they think and what they would like to see. So it’s just a matter of prioritizing what the citizens want and what the actual needs of the city are. A lot of times the people don’t see underground, see above, or see around. They aren’t privy to what we have, to see what needs to be done for the city. But sometimes they do, because the sewage is backed up in their house. the challenge is just balancing out what they see and what we see from a council standpoint.”

Mayor Taylor’s goal for the near future is to improve the roads and sewage of Sulphur Springs.

When asked by KSST news if he would seek another term, Taylor responded, “That I would have to check with my wife and the rest of the kids about. Not that being mayor takes me away from my family, but I’m pretty sure there is a good chance of it because I love what I’m doing as a mayor. We’ll just have to see.”