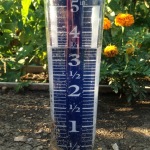 April continued the trend in 2015 of months with above average rainfall. The Sulphur Springs Water Treatment Plant recorded 7.63 inches of rain during April, that’s more than three inches above the norm. There was recorded rainfall for 19 days during the month of April including the largest total of 2.21 inches that fell on April 25, last Saturday. Sulphur Springs has now had 21.65 inches of rain during the first four months of 2015.

Average temperatures during April were 75 for a high and 55 for a low. There was an 88 degree high recorded on Monday and a low of 45 degrees on April 4.