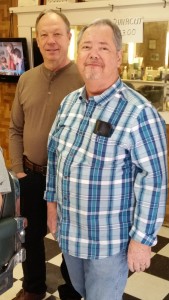 Customers, family, and friends celebrated Mike Briley’s 50th anniversary as a barber in Sulphur Springs. Briley began as a barber on College Street March 6, 1965 as a partner with Louis Jones and Robert Anglin. Briley said it was hard to break in when he started. There were a number of barbershops in Sulphur Springs at that time.

He followed in the footsteps of his dad who was a barber. Briley noted that his dad was doing what he wanted to do and enjoying the work and that motivated him to take up the trade. He has not plans to retire in the near future noting three college degrees, “none with my name on them.” Briley has two daughters.

He continues in the back chair at his shop located across from the courthouse on Jefferson Street.