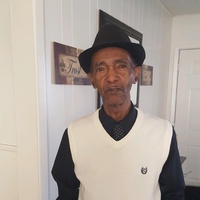 Deacon Finney was born on June 12, 1936 in the Dial Community in Fannin County to Horace Lee Finney and Allie Mae Wade Finney.

Deacon Finney united with St. James Baptist Church at a very young age and was ordained as deacon by Rev. Lynwood.  He served in the choir and on deacon board until his health began to prevent his attendance.

Deacon Finney worked as a mechanic and was employed by D&E Automotive for many years.