Sulphur Springs Public Safety Director and Police Chief Jay Sanders  and paramedics stopped by the KSST studios to invite everyone to a public event coming up Saturday May 19, 2018 from 10am til 2pm on the downtown Celebration Plaza. It’s a Public Safety Extravaganza by “The Team” which is made up of Sulphur Springs Police and Fire Departments along with Hopkins County Sheriff , Fire and EMS departments. 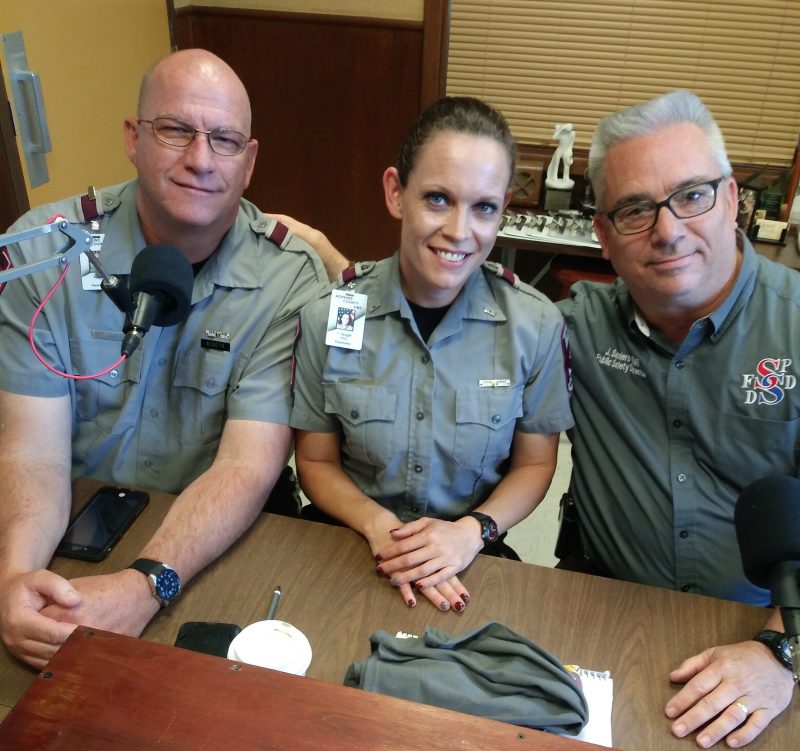 Sanders stated “One Mission…One Team” is descriptive of the teamwork we enjoy in Hopkins County because of the eagerness of these departments to work together to serve, protect and educate the local population. At “The Connection” there will be plenty to see for all ages, including attractions for children. Expect to see a landing by an EMS helicopter, the “Smoke-House Simulator”  walk-through demonstration of a house fire, a “Stop The Bleed” educational demonstration for civilians, an Ident-a-Kid fingerprinting booth, the 9-1-1 Dispatch booth with what to expect if you call 9-1-1,  and “The FireHouse” water feature where kids spray water on a simulated fire. In addition to bounce houses and face-painting, you might also catch Batman strolling around downtown Sulphur Springs”.

Lt. Tabitha Vaught and Paramedic John Suits are trained EMS workers who described some of the vehicles and special equipment which will be displayed or demonstrated, including the AMBUS, a 20-person mass casualty evacuation bus. This bus had barely been delivered and outfitted last summer when called into duty to assist with Hurricane Harvey relief. Vaught, Suits and several other Hopkins County paramedics were assigned to a 10-day deployment to the coast at Rockport and other locations, using the vehicle to evacuate and transport hurricane victims from schools, nursing homes and shelters during the state-wide safety effort. And not every county or city owns an AMBUS or an MRAP vehicle. The MRAP armored personnel carrier is used by SWAT teams to get up-close in special situations for countering armed attacks, ambush or terrorist acts when an armored vehicle is the best tool for the safety of responding officers. According to Sanders, with these tools, local officials can respond to every type of situation that even larger cities might encounter. As Public Safety Director, he feels that Hopkins County residents are well-protected and well-served due to the teamwork apparent in the numerous departments. He mentioned a case in point: the recent 2018 crash on Highway 19 North involving an entire family whose vehicle overturned into a deep creek with high banks. Because of quality teamwork and multiple-victim equipment, four persons who were “dead at the scene” received quick EMS response and demonstrated pulse when evacuated to various hospitals. In fact, two of the children are now expected to make full recovery following rehabilitation.

Lt. Vaught is a 5-year member of Hopkins County EMS, and formulator of the “The Connection” event. Paramedic Suits, who at one time was an ID Dog trainer, is a firemen and Fire Chief at Point, Texas.  He joined Hopkins County EMS two years ago. Chief Sanders has been in law enforcement for 33 years, and will observe his 30-year anniversary with Sulphur Springs Police Department in July 2018. He added EMT to his credentials in 1999 and graduated Fire Academy in 2016.

This year’s public safety extravaganza has an added fun feature, the “Battle of the Badges” Burger Cook-off. The contest will take place on Saturday at noon, and Team members are invited to form teams and enter. Following judging, burgers will be available for those who attend the public event, along with hot dogs, Kona Ice, cold drinks and water, lots of giveaways and fun.