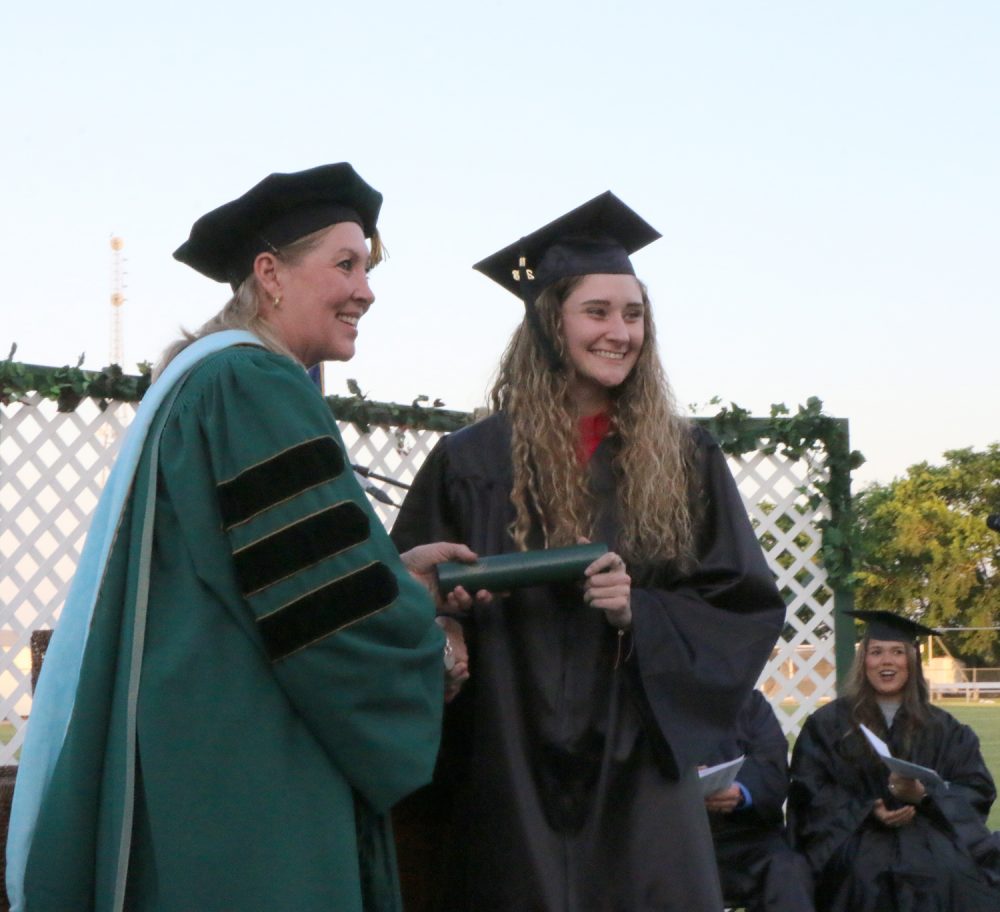 Lauren Hudson of Cumby graduated with her Associate’s Degree in General Studies with Highest Honors (4.0 GPA) prior to graduating from high school.

A beautiful evening greeted graduates, their families and friends at Noyes Stadium on May 11 during the 93rd spring graduation ceremony of Paris Junior College. Out of 371 students graduating with a certificate or associate degree, more than 200 students chose to participate in the ceremony.

Graduating students ranged in age from 17 to 61 years, and were 45 percent male and 55 percent female. They came from 34 Texas counties, 12 states, Puerto Rico, and Ghana.

“In this year’s graduating class, we have 32 students receiving their associate degrees who will graduate from high school in the next two to three weeks,” said PJC President Dr. Pam Anglin. “Of these, 22 are from Quinlan Ford High School, three are from Wolfe City High School, two are from Miller Grove High School, and one each from Cumby, North Lamar, Paris, Prairiland, Roxton, and Lone Oak high schools.”

“Among our graduates are this year’s valedictorians from Cumby and Miller Grove High Schools;” Dr. Anglin said, “a young man who made his own prosthetic hand as a final class project in our computer aided drafting and 3D Printing program; a student who was fourth in the nation in stolen bases in the NJCAA this season; and members of the baseball team with an overall GPA of 3.70, which is one of the highest athletic team GPAs in the nation.”

The 2018 Master Teacher Award was then presented. Nominations are made by faculty peers and then reviewed for final selection. Winning was History Instructor and Social Sciences Division Chair Lisa Johnson.

“This instructor truly represents the student-friendly, people-friendly characteristics of Paris Junior College,” said Dr. Anglin, reading from nominator comments. “She knows that as our classrooms continuingly become more diverse, the challenge to engage all students is even more critical. She goes out of her way to help students succeed so that they may continue to pursue their academic goals. She was among the first, if not the first, to conduct an on-line course for Paris Junior College receiving the NETnet Consortium Outstanding Distance Educator award.”

The Distinguished Service Award, PJC’s highest student honor, was announced next by Associate Vice President for Student Access and Success Sheila Reece. This award has been presented annually to a PJC graduate since 1935, when it was first given to Louis B. Williams, who later became president of Paris Junior College. The Award recognizes academic achievement and service to PJC and the community and is given to an outstanding graduating student. PJC faculty and professional staff determine the winner.

Named to the honor for 2018 was Ryleigh Davidson, a graduate of Prairiland High School from Blossom. She is a nursing major and a two-year member of the PJC cheer squad. She also serves as PJC’s 2017-2018 Homecoming Queen. She plans to continue nursing school at PJC, wanting to eventually travel with her nursing degree.