This will be the first of four reports on the interesting women competing for the title of 2018 Ms. Hopkins County Senior Classic. The contestants represent women age 60 and older who live, work and volunteer in Hopkins County. These reports are taken from interviews between the ten contestants and Enola Gay on the KSST Morning Show during the week of May 29-June 1, 2018. The public is invited to attend the Pageant on Saturday June 9 at 6 pm in the banquet hall of the Civic Center in Sulphur Springs, Texas. 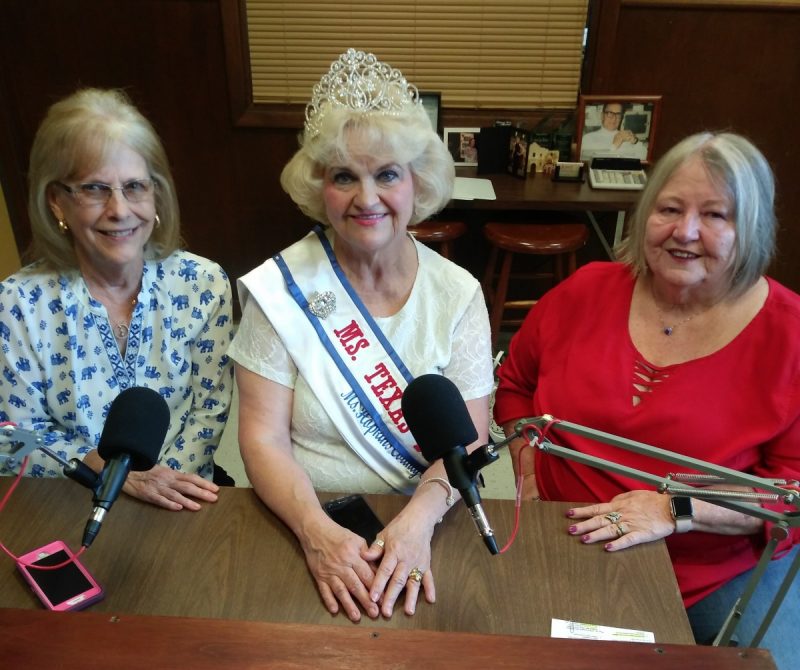 Along with her husband Loyd, Mary Ivey is a volunteer for Meal a Day. The seniors along the route bring pleasure and purpose to her day, and Mary admits they do more for her than she does for them! She spent her working career with the Kellogg Cereal Company, and she and Loyd recently celebrated their 55th wedding  anniversary. They have 2 sons and 2 grandchildren, all of whom live in Hopkins County. Once this couple retired, they began a string of exciting hobbies…from their first zipline ride across Royal Gorge, to a tour across the Grand Canyon by helicopter, and now enjoying white-water rafting anywhere there’s some rapids, most recently along the Snake River in Wyoming. The slim 70-year-old recalled that her zipline ride was quite slow, allowing her plenty of time to look down at everything and also gain some insight. She feels there is so much going on in our busy lives that we miss out by not slowing down! Now, she tries to “stop and smell the roses” during each day. Her dream vacation would be a trip to Hawaii. Her talent presentation will be a skit at the Pageant on June 9, 2018.

Judy Moore, age 68, lives at Tira, Texas and is currently Director of the Hopkins County Community Chest and Food Pantry in Sulphur Springs. Her job allows her to help an average of 1,000 clients with utility bills, food and transportation, as well as providing 11,000 meals per month through the Food Pantry. In 2017, she was recognized for her innovation of the Mobile Pantry and expanded outreach services to the communities of Como, Sulphur Bluff and Peerless. Judy is a military veteran who began her career as an Army nurse with service in Viet Nam. After retirement she joined the Air Force for a short stint, then went into the United States Marine Corps from which she also retired, totaling 37 years of military service. She is unmarried, the mother of 3 children and 5 grandchildren. She has a private pilot’s license and enjoys scuba diving. Her hobbies include woodcarving, which will be part of her talent presentation during the Pageant.

Patsy Crist of Cumby, Texas was crowned Ms. Hopkins County Senior in May 2017, then advanced to the Ms. Texas Senior Pageant in September 2017, which she also won. Patsy has been married to Gene Crist for 50 years and they have 2 children and 9 grandchildren. She enjoys kayaking at Beaver’s Bend and the State Parks, a hobby she began after age 60. She is a 15-year-member of the Red Hat Society, and is also part of a local Seniors entertainment group. During her tenure as Ms. Texas Senior, she wore her crown in the State Fair Parade in Dallas, the Rose Parade in Tyler and at events at Southfork. You will see her again during the Hopkins County Dairy Festival Parade and at the Ms. Hopkins County Senior Pageant Pageant on June 9 where she will present a song and soft shoe dance. Her winning talent in 2017 was “Lucy’s Vitameatavegamin” in costume. Patsy wants all local Senior citizens to know that they don’t have to just sit and stare at the TV but a multitude of friends and interesting, healthy activities is awaiting them at the Sulphur Springs Senior’s Center under direction of Karon Weatherman and her helpful, caring staff.