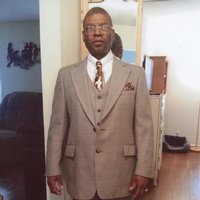 Mr. Johnny Ray Savage, 61, of Commerce passed away on Sunday, May 27, 2018 surrounded by family at his home in Commerce.

Johnny Ray was a truck driver by trade. This came after he proudly served two tours of duty for the United States Army where he obtained the rank of Sergeant.

On April 30, 1999 he married Terri Landry in Paris, Texas after a wonderful courtship and they shared life adventures for over 27 years. Johnny Ray loved to fish, talk (he could talk your ear off), ride his motorcycle and loved spending time with his friends and family.  He was one of those people who never met a stranger and would share his thoughts with anyone.  He was a member of the Full Gospel Pentecostal Church of Commerce and also had close ties with the Friendship House of Praise as well.

He was preceded in death by his parents: Vernon Savage and Eddie P. Easter, a son, Johnny Ramirez, and a sister, Cynthia A. Savage.

Service will be held on Saturday, June 2, 2018, at 11:00 A.M. at Mount Moriah Baptist Church of Commerce, with Pastor Dwight King officiating.

Arrangements are under the care of the Jones-Walker Funeral Home of Commerce.