Wildcats, Tri-Champions of District 16-5A Will be 3rd Seed as Bi-District Begins Thursday

Home » Featured » Wildcats, Tri-Champions of District 16-5A Will be 3rd Seed as Bi-District Begins Thursday

The Tri-Champions of District 16-5A met at Mount Pleasant on Saturday to determine the #1, #2 and #3 seeds for the upcoming playoffs. The Wildcats dropped two games and will be the district’s #3 seed.

Texas High defeated the Wildcats and Hallsville to claim the #1 seed. Hallsville lost to Texas High but defeated the Wildcats to claim the #2 seed. In the first game Saturday, Texas High shut out the Wildcats, 5-0. Tyler Armstrong took the loss going two innings allowing 4 earned runs and three hits. Armstrong also struck out two and walked two. Texas High hit two run homers in both the first and second innings. It was Armstrong’s first pitching appearance in five weeks . He last pitched a scoreless inning against Seagoville on March 24. Jaxon Chaney pitched the final five innings allowing an earned run and six hits and striking out two. The Texas High starter scattered five Wildcats’ singles to get the shutout. The Wildcats got hits from Dawson Draper, Ryan Humphries, Pacen Edwards, Gavin Millsap and Chaney. The Tigers outhit the Wildcats nine to five.

Texas High then pounded Hallsville, 11-2 to take the top seed. Hallsville threw three pitchers against Texas High including a couple of pitchers who threw in relief against the Wildcats Friday night.

Hallsville then nailed down the #2 seed with a 7-5 win over the Wildcats. The Bobcats threw ace Mason Higginbotham who also pitched last Tuesday night. The Wildcats countered with two pitchers who last threw in the Grayson County Classic Tournament in early March. Draper was especially rusty in four innings issuing six walks and hitting two batters. He was tagged for five earned runs on only two hits and he struck out three. Kamren Harrison went two innings and gave up two earned runs on three hits. He also walked two and struck out one. Hallsville got a big two run home run in the bottom of the sixth inning to break a 5-5 tie. The Wildcats trailed 1-0 when they scored four runs in the second inning on four hits and a Bobcat error. Chaney got on base on an error. Draper singled, Edwards had an RBI single. Thompson had an RBI single when he hit a ball to right field that got lost in the sun. Millsap had an RBI single. Austin Dodd drove home a run on a fielder’s choice ground ball. Hallsville rallied to go back ahead 5-4 and the Wildcats tied the score with a run in the top of the fifth. Dodd walked and stole second base and then scored on a Ryan Humphries RBI double. Then came the Bobcats two run homer in the sixth inning that proved to be the difference. The Wildcats actually outhit the Bobcats, six to five.

As the #3 seed, the Wildcats draw Wylie East in a bi-district playoff. The head coaches meet after the last seeding game Saturday and decided on a schedule that will feature a Thursday game at Wylie East at 7:30 p.m., a Friday game at Wildcat Park at 7:30 p.m. with a Saturday game at 2 p.m., if necessary, at a site still to be determined. 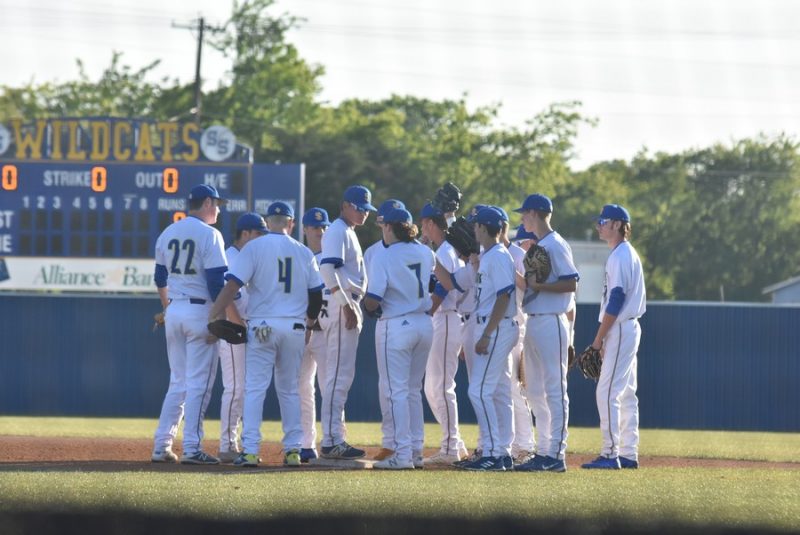