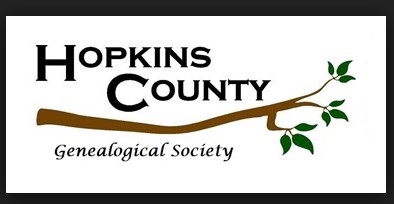 The Hopkins County Genealogical Society met on March 15, 2018 in the library at 611 N. Davis Street. President John Sellers called the meeting to order at 7:00 PM and welcomed everyone.

President Sellers asked if everyone had read over the minutes. There were no questions. The minutes were approved as prepared. Copies of the financial report were temporarily unavailable for distribution, so they will be made available at the next meeting.

With the business portion of the meeting concluded, 1 st Vice President Rhonda Bechhold introduced the speaker, Paul Ridenour, of Dallas, Texas. He is an active researcher of several organizations and is the current president of the Texas Society of the War of 1812.

Mr. Ridenour began by mentioning two sisters, Essie and Adelle Smith, who had a Sulphur Springs connection. Charles Augustus Smith and Emma Leola Glausier Smith came to Texas from Georgia and Alabama. She was a mean lady. She once shot a man and killed a man who was foaming at the mouth while wandering in her back yard. Their first daughter was Mamie Pearl Smith Whaley, who was Mr. Ridenour’s great grandmother. Their 6th and 8th children were Ora Bernice Smith and Adelle Smith. The Smiths were a very poor family. Essie was adopted out of the family in 1916 when she was 6 years old. She was later returned to her family. Adelle was adopted out at 4 years old in 1916 by John R. Hughes and Addie Smoke Hughes. Essie and Adelle never saw each other again. When Essie was about 21 years old, she was walking to church one evening with her sister, Ora, when her boyfriend came along in his new pickup truck. He was showing off for the girls when he accidentally struck Essie. She died in the hospital two days later.

Adelle did not know about her sister’s death. In the 1980s, she was still trying to locate Essie. Essie had been dead since 1931. Adelle died in 1988. Her daughter and the grandchildren all know about it now. Mr. Ridenour is in contact now with all of the living family members. They are all cousins. They get together with each other from time to time.

Next Mr. Ridenour began the second part of his presentation about three Creek sisters who owned plantations in the Jefferson area. He rediscovered the old Mt. Tabor Indian Cemetery in 2005 after searching for it for two years. It is located between Laird Hill and Leverett’s Chapel in Rusk County on the old homeplace of John Bell, Jr. Mr. Ridenour thinks there are 30 to 50 graves there. All the markers are gone. The cemetery was destroyed by oilmen in the 1950s – ‘60s. Mt. Tabor was an old Cherokee Indian community. Buried in the cemetery are mostly Cherokees, some Choctaws, some Chickasaws, and some Creeks.

Rebecca McIntosh Hawkins Hagerty was born in 1815 in the Lower Creek Indian nation in Georgia. She was the daughter of William M. McIntosh, half-Scottish Chief of the Lower Division of Creeks, and his second wife, Susannah Ree, who was a full-blooded Creek. When Rebecca was 10 years old, her father agreed to sell a large part of the Creek lands in Georgia in exchange for a “permanent” home west of the Mississippi. He was murdered by a band from the Upper Creek Nation who resented the loss of the tribal lands and their own forced removal. The following year, Rebecca’s older half-brother, Chillicothe McIntosh, led the Creeks out of Georgia to the Indian Nation to the west. Her father&#39;s half-brother, Roley McIntosh, later assumed the role of Chief of the Lower Creeks until his retirement in 1859.

In 1831 Rebecca married Benjamin Hawkins of the Western Creek Nation. Hawkins was the half-Indian son of a Creek woman and Colonel Benjamin Hawkins, Sr., a former United States Congressman. Their first child, Louisa was born December 27, 1831, at Fort Gibson, Indian territory. There Ben became acquainted with Sam Houston, and in 1833 the family migrated to East Texas where Hawkins acquired a headright on 3700 acres in Marion County, and slaves to work it. A second child, Anna, was born in Nacogdoches in 1834. Here Hawkins and his friend Houston
engaged in some land transactions and other dealings together, and Hawkins was reportedly involved in an attempt to purchase land for the settlement of &quot;a large body of Indians from the United States&quot;, the rumor of which raised the fear and anger of the Anglo-American citizenry. Sometime in 1836, he was murdered, probably at Nacogdoches and perhaps as a result of ongoing conflict between the Indians and other settlers. Rebecca and their two daughters inherited his property.

In 1838, Rebecca married Spire M. Hagerty, who held land and slaves in Harrison County. They had two children who survived to maturity, Frances and Spire, Jr., born at the Phoenix Plantation near Marshall in 1848 and 1849. The marriage was very troubled due to Hagerty’s drunkenness. They divorced in either 1848 or 1849. In the 1840s, Rebecca’s two sisters, Delilah and Catherine Hettie McIntosh, had married William Drew and James Willison, and settled on part of the Hawkins land near Rebecca&#39;s home north of Jefferson in Marion County. In 1849, Spire M. Hagerty, Sr., died in Montgomery, Alabama. There were several legal disputes in the Hagerty family over his
estate. Finally, in 1853, the Texas Supreme Court partitioned the estate, giving Spire M. Hagerty, Jr. 3/8 of the property, and Frances retained 5/8. From the date of her final separation from Spire Hagerty, probably in 1848, Rebecca managed the plantations; the Refuge in Marion County and the Phoenix, in Harrison County, as well as the
household. The principal cash crop was cotton, worked by a slave force that numbered 102 in 1860. The Phoenix plantation was later bought by Thomas Jefferson Taylor, father of Lady Bird Johnson. There are no structures still standing on the Refuge plantation, although there are numerous artifacts from the house. The house was built in 1849 and was completely collapsed by the 1920s. Rebecca died circa 1886 in the Indian Territory and is buried there. Spire Hagerty, Jr. died in Jefferson in 1886 of tuberculosis. None of the McIntosh-Hawkins- Hagerty clan remained living at Refuge or Phoenix plantations by the mid-1890s.

The meeting was adjourned at 7:58 PM.