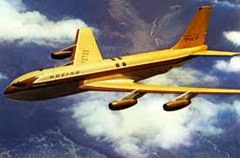 On July 15, 1954, a graceful, swept-winged aircraft, bedecked in brown and yellow paint and powered by four revolutionary new engines first took to the sky above Seattle. Built by the Boeing Aircraft Company, the 367-80, better known as the Dash 80, would come to revolutionize commercial air transportation when its developed version entered service as the famous Boeing 707, America’s first jet airliner.

Quickly Boeing turned its attention to selling the airline industry on this new jet transport. Clearly the industry was impressed with the capabilities of the prototype 707 but never more so than at the Gold Cup hydroplane races held on Lake Washington in Seattle, in August 1955. During the festivities surrounding this event, Boeing had gathered many airline representatives to enjoy the competition and witness a fly past of the new Dash 80. To the audience’s intense delight and Boeing’s profound shock, test pilot Alvin “Tex” Johnston barrel-rolled the Dash 80 over the lake in full view of thousands of astonished spectators. Johnston vividly displayed the superior strength and performance of this new jet, readily convincing the airline industry to buy this new airliner.

This original prototype aircraft is now at the Udvar-Hazy Museum at Dulles Airport.
Watch the video of Tex Johnston’s barrel roll with a Boeing367-80 (Dash 80)
Here is a second video of the boeing 707 barrel roll. Click here to download and watch!
The included information comes from local Sulphur Springs resident Tony Hughes. Mr. Hughes worked on, performed engine run up, pre-flight/post flight and flew as an aircraft mechanic observer on FCF’s (functional check flight), along with supervising hangar and flight line operations for over 40 years (1956-1996) at the Greenville, Tx. plant, formerly known as TEMCO. The Greenville plant started as Temco (Texas Engineering & Manufacturing Co.) and changed to Ling-Temco Electronics, Inc. in 1960, then Ling-Temco-Vought, Inc. in 1961. The company changed again to LTV Electrosystems, Inc. in 1965, and E-Systems, Inc. in 1972. In 1995 a merger changed the name to Raytheon/E-Systems, and now the company has been managed by L-3 Communications since 2002.