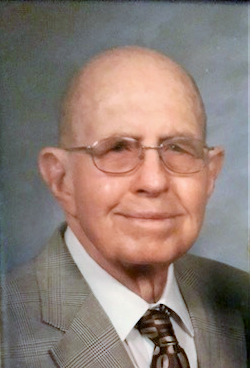 Funeral services for Robert C. “R.C.” White, Jr., age 91, of Sulphur Springs, will be held at 2:00 p.m., Wednesday, December 20, 2017 at West Oaks Funeral Home Chapel with Bro. Tommy Johnston officiating. Interment will follow at Restlawn Memorial Park with the Hopkins County Military Coalition serving as pallbearers. Honorary pallbearer will be Walton Grice. Visitation will be held from 1:00 to 2:00 p.m., prior to service. R.C. passed away on Thursday, December 14, 2017 at Rock Creek Health and Rehab.

He was born on July 28, 1926 in Lamesa, TX, the son of Robert White Sr. and Zora Mabel Guinn White. He married Elna M. Sims on September 4, 1943 in Lamesa, Texas. She survives. He was an auto maintenance tech for the Army-National Guard. He served in WWII and later retired after 37 years of service. R.C. joined the Navy in 1944, and was discharged in 1946.  He was a member of the Texas National Guard from 1948 to when he retired in 1986.  He was a member of First Baptist Church, life time charter member of the WWII Memorial Society and the Texas Military Forces Museum, as well as a member of the Hopkins County Military Coalition.

In addition to his wife Elna, R.C. is also survived by niece, Patsy Hawkins and husband Garland of Cisco, TX, nephew, Kenneth Cox and wife Jane of Lamesa, TX, and various great nieces and nephews.

He was preceded in death by his parents and sisters, Louise Cox and Oleta Waller.

In lieu of flowers, memorials may be made to the Hopkins County Military Coalition, in C/O Gene White, 147 Fore St., Sulphur Springs, TX 75482. Arrangements are under the direction of West Oaks Funeral Home.