Garry Schnabel, Executive Director of the Patriot Sporting Challenge and Chuck Roy, founder and board member, visited the KSST Good Morning Show to share some good news about the success of the inaugural event of the 501c4 organization and it’s 501c3 arm, PSC Patriots. Plans are now going forward for the 2018 Patriots Sporting Challenge which will further the work of the national organization, Folds of Honor. Following is a press release, dated December 13, 2017.

Yantis, Texas – The Patriot Sporting Challenge recently presented to the Folds of Honor Foundation a check for $100,000 to support the educational opportunities for dependents of those U.S. Servicemen who have been lost in action or significantly disabled.

The Patriot Sporting Challenge’s inaugural event “Lunkers, Bunkers and Clays” was held at Lake Fork Texas on October 27 & 28 and featured 42 competitive 4-man teams competing in a trilogy of sporting events. This was a first ever challenge that coupled fishing, golf, and shooting sports into a tournament format for determining a Challenge Grand Champion. The Links at Land’s End, Hidden Lakes Resort, and Lake Fork presented the competitors a challenging arena for the competition. The winners received a trophy that is on permanent display at The Links at Land’s End as well as significant cash and merchandise prizes.

The check presentation was held in the corporate headquarters of Skeeter Boats in Kilgore, Texas and was attended by Mr. Jeff Stone, Senior Vice-President and General Manager of Skeeter and Ms. JoAnne O’Bryant, Senior Marketing Project Manager. Skeeter was a Signature Sponsor for the event. Mr. Kelly Jordan, a Skeeter Professional Staff member, also attended and added his appreciation as a participant in the Challenge.

Accepting the check for the Folds of Honor was Diane Nemecek, Regional Development Manager. Presenting the check was Garry Schnabel, Director of the Patriot Sporting Challenge.

Mrs. Nemecek was thrilled to receive the donation and said, “This is an overwhelming honor to receive these funds to support the Folds of Honor’s mission statement, ‘Honor the Sacrifice by Educating their Legacy.’ This money will forever change the life of many dependents that have been adversely affected by the loss of a military family member. Many educational scholarships will be made possible by today’s gift.”

For more about the Folds of Honor, including mission statement and history, see www.foldsofhonor.org

Check out the challenge course at www.golflakefork.com, details of the shooting competition venue at www.hiddenlakeshr.com, and Lake Fork Texas at www.lakeforktexas.com and Facebook Patriot Sporting Challenge. 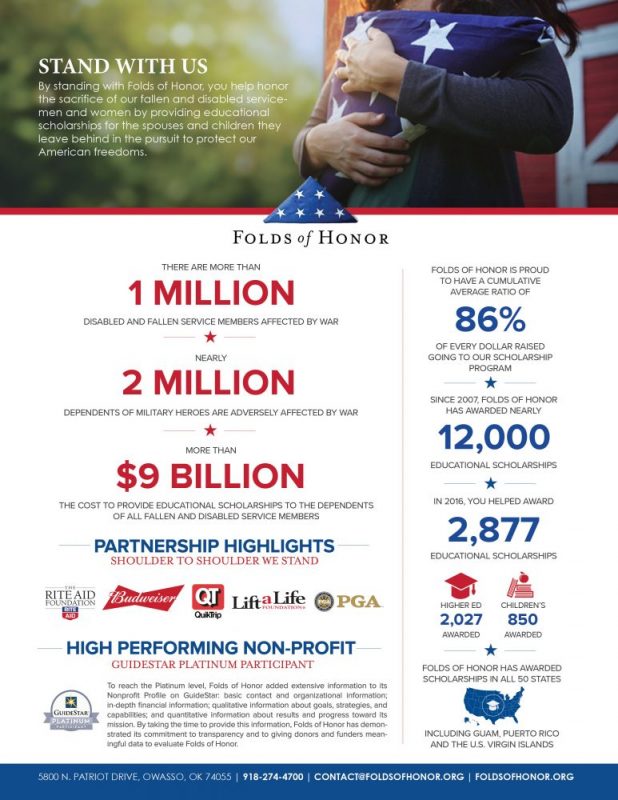