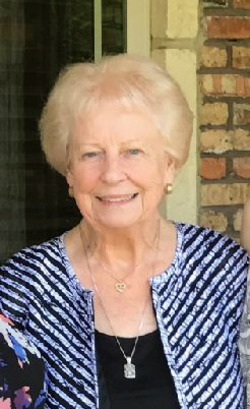 Sue was a loving wife, mother, grandmother, and great grandmother, with a contagious smile.  She was an inspiration and an example to so many of us who had the privilege to know and love her.  A wonderful woman, loving and sweet, Sue could light a room with her presence, and was blessed with a boundless desire to give of her time, talent, and self to her family and friends. She loved unconditionally, and placed family above all else.  She will be missed by all who knew her.

Born on January 8th, 1935, to the late Oscar Wade Dubose and Ida Stubbs Dubose in Victoria, TX.  Sue was raised in Hobbs, NM, and married the late Earl Ray Glenn there in August 1953. The two moved to Sulphur Springs, Texas, in 1965, where they would raise their two children, Belinda and Kirk Glenn. Sue married TC Brown in Garland, Texas, Feb 18, 1995 and worked as a real estate agent for several years in the greater Dallas area.  Sue and TC lived in Hurst, TX, until they moved to Midlothian, TX in 2005.  She made so many friends through all these adventures, and loved each and every one of them.  Recently, her most enjoyable job was being a grandmother and great grandmother to eight loves of her life, showering all of them with her boundless energy and love.  Sue was a member of the First United Methodist Church of Sulphur Springs, and was a founding member of the local Beta Sigma Phi chapter.  She also managed Ellen’s on the square and owned Primrose Lane while living in Sulphur Springs.

Sue was preceded in death by her daughter- Belinda Janice Glenn, her husband – Earl Ray Glenn and her siblings – Valarie Darling, Glenn Dubose, and Allan Dubose.