Two early turnovers that led to short TD runs and a big play touchdown put the Wildcats in a 21-0 hole that they could never get out of as Texas High defeated the Wildcats, 35-21 at Gerald Prim Stadium Friday night.

On their very first offensive play, the Wildcats fumbled and Texas High recovered at the Wildcats 7 yard line. Texas High scored on a four yard run by back Chris Sutton. The Tigers led 7-0 just 42 seconds into the first quarter.

On the second Wildcats drive, the Tigers intercepted a pass. After another four yard TD run by Sutton, Texas High upped their led to 14-0 with 9:38 still left in the first quarter. Later the Wildcats pinned Texas High down at their own four yard line after a nice punt by Angel Tavera. Tigers quarterback Riley Russell passed from his own end zone and teamed up with receiver Tevailance Hunt for a 96-yard pass and run for a touchdown. Less than seven minutes into the game, Texas High was up 21-0.

The Wildcats beat the clock and scored with just 17-seconds left in the second quarter. Back Colton Allen ran for a 6-yard TD. At the half, Texas High was up, 21-7.

The Wildcats managed one final score as quarterback Young scored on a 2 yard run and the Wildcats trailed 35-21 with just 39 seconds left to play. That’s the way it ended.

The Wildcats are now 0-3 in district play and 2-5 for the season. They have lost five straight games. The Wildcats have a bye next Fridaybefore playing in Mt. Pleasant on October 27. 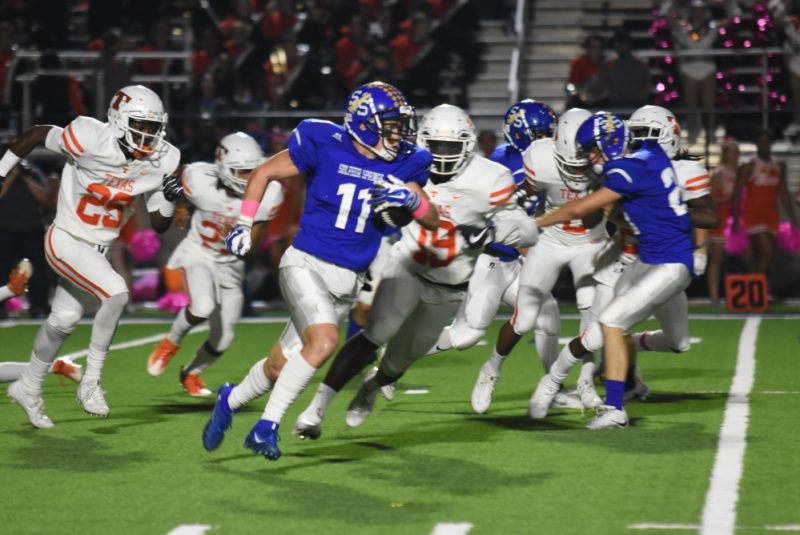