She grew up in Dallas and met her husband through her brother during their Army Days. Today, Gene and Patsy Roan Crist have been married almost 50 years, and Gene is her biggest support in her new role as Ms. Texas Senior Classic.

Patsy Crist was crowned Ms Hopkins County Senior Classic in June 2017, and then won the State title on September 23, 2017. One of her first appearances will be the Texas State Fair Parade on opening day, September 29. First Runner-up Charlotte Graves from Bullard and Talent Winner Linda Pickle-Hill of Hopkins County will join Patsy in waving to the crowds along the parade route. You’ll see her locally during October’s Hopkins County Fall Festival Parade on October 21 followed by the Sulphur Springs Lions Club Christmas Parade on December 1.

Patsy feels that following her child raising years and career roles, this is now “her time to live it up” and she is embracing every opportunity to have fun and meet people. One of her favorite and most helpful outlets has been Red Hat Society meetings and conventions and the talent presentations put on by the Regal Foxy Fillies Chapter of Cumby.

As Ms. Texas Senior Classic, Patsy was bestowed with a crown, sash, trophy and gold-dipped rose scepter. She also took home the trophy for Best Philosophy of Life. Her philosophy is that when every woman decides to discover herself as a person and the depths of her talents, then she is better equipped to give back to her community and other women around her. Entering the Ms Hopkins County Classic Pageant was that turning point for Patsy. Her talent presentation, a take on I Love Lucy’s “Vitameatavegimin”, came from a real love for Lucy Ricardo and a passion for watching the classic episodes. In fact, she has memorized all the dialog in a good number of the episodes. 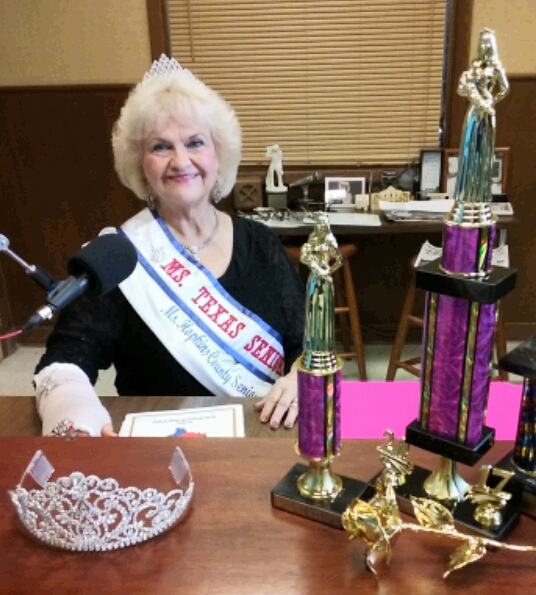