Hopkins County EMS AMBUS and the six paramedics that were deployed to South Texas to assist in medical care and transport during Hurricane Harvey have returned. Monday night, Brent Smith and Jeff Sanderson presented a report of their activities to the Hopkins County Hospital District Board during their monthly meeting. The team served in Victoria, Rockport, and Beaumont.

Deployed to the staging center in San Antonio, their work began in Victoria, Texas, where team members moved eight patients from a long term nursing facility. However, it was not long before they were in Rockport, where Harvey’s damage was heavy. The team assisted in moving people from a Rockport school that served as a shelter but had numerous roof leaks after the storm passed to a shelter in Austin. Passenger buses and two ambulances transported the people while the AMBUS and team remained in Rockport. Using food from the school and other food and cooking equipment donated, the team fed over 100 people. They also acquired shoes from the county jail and socks from various sources to give to people who needed them.

Everyone who had survived the hurricane’s fury had a story to tell about their experiences, according to Sanderson. He told stories of some of those that just came by to talk. Scenes from the storm damage and pictures of those who were helped were presented in a power point presentation. Among the pictures, the destruction of the Ingleside Airport and a picture of the team with Governor Greg Abbott who stopped by to thank them for their service.

In Beaumont, the team and the AMBUS found a more difficult service. Getting into Beaumont was difficult due to the water level on roadways and the traffic problems created by accidents. Also, the AMBUS can only travel in water that is 2 feet deep because the air intake is under the motor of the AMBUS. They were stationed at Jack Brooks Field where a tent hospital was being set up. While awaiting the full service of the make-shift hospital, the team set up with a military doctor and nurses and teams from Nevada and Indiana. As they cared for patients, the military doctor confiscated a C-130 to fly four patients to San Antonio due to their conditions. When the field hospital was established, the team turned their attention to evacuating patients from Beaumont Baptist Hospital. The hospital had no water thanks to the heavy rains and storms that had created water issues for the area. Those patients were taken to Louisiana and other Texas hospitals. It took two days to evacuate the hospital. The only way out was by air. Helicopters and medical plane transport were used. 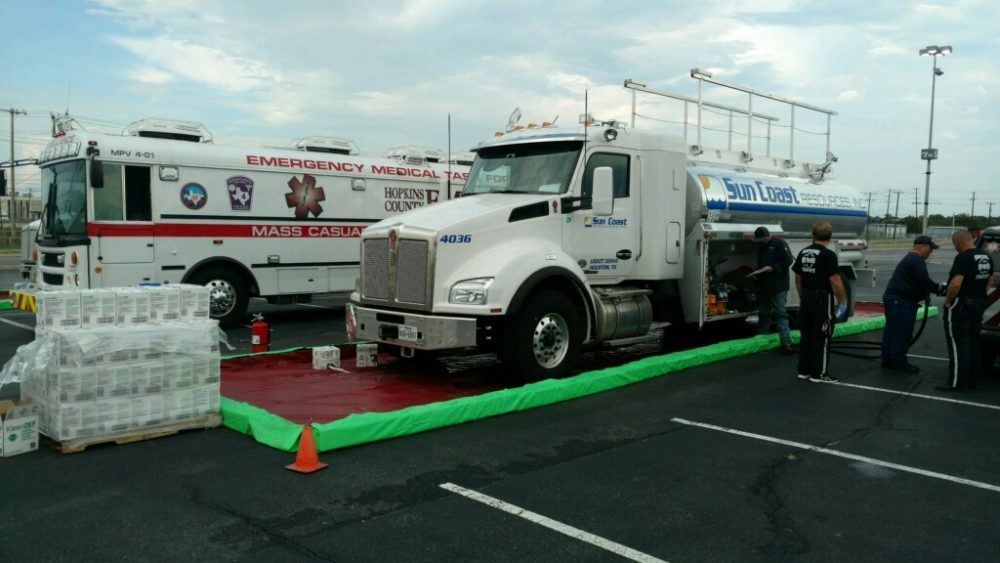