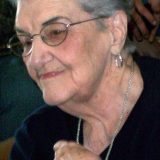 Agnes Laverne Ponder was born on August 19, 1923 in Garden Valley, Texas, the daughter of Edgar Allen and Minnie Lavada (McPhail) Wright.  She married Edgar “Red” Ponder in Rockwall, TX on August 19, 1944.  Agnes was a retired owner of Ponder’s Café and The Steakhouse. Agnes was a member of First United Methodist Church.