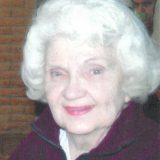 Reba Dean Williams was born on February 3, 1922 to Burt Garrett and Annie Fergerson.  She married Murray Emanuel Williams in Hopkins County, September of 1941.  Reba was the owner of a Dairy Farm and member of League Street Church of Christ.