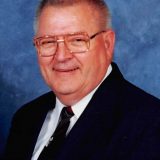 Morris (Butch) William Bolton, age 78, beloved husband, father, grandfather, brother, uncle, and friend went to be with the Lord on July 6, 2017 at his home in Sulphur Springs, TX surrounded by his immediate family.

Morris was born in Greenville, Texas on July 4, 1939 to Luther and Mary Lee Bolton and was quickly nicknamed ‘Butch’.  His family and close friends called him Butch but his business colleagues and co-workers knew him as Morris.  Butch began working with his Winnsboro buddies in the mid 1950s when they caught chickens for Taft Tinney.  As the friends married and began to gather annually, they called themselves the Chicken Catchers and have maintained their friendships to this day.

In business, Morris was involved in Southwest Meat Association his entire career, beginning in 1963 with SMA charter member, Pratt Packing Company in Sulphur Springs, TX and culminating with his retirement from Winn Meat Company in 2002. Morris was the first, and one of a very select few individuals to be elected to two terms as Chairman of the SMA Board; 1984-85 and 1987-88. He led the association through some very challenging times and some significant shifts in industry structure. There were times when he organized SMA members to financially support the association when it appeared it might not even survive, thus cementing his legacy in an SMA history that would never have seen its 60th anniversary but for his efforts. Morris’ love for SMA and his industry colleagues made him a highly respected leader. He was very active in planning excellent conventions and in fundraising for SMA scholarships.  His leadership in the industry earned him the distinction of being one of six inaugural inductees into the SMA Hall of Honor in 2016.

After retiring from the meat industry, Butch finished his working career at Sulphur Springs Independent School District where he spent 10 years and made great friendships.

In his leisure time, Butch love golfing, hunting, traveling and many other outdoor activities with family and friends.  One of the proudest moments of his life was earning his degree in accounting from East Texas State University, now known as Texas A&M-Commerce. His most important role though was as devoted supporter and role model for his wife, children and grandchildren.  He had a great passion for life, family and friends and brought laughter, joy and love into many lives, especially that of his family. He left everyone with incredible memories of great times whether at home or away.

In lieu of flowers the family requests memorial donations be made to: