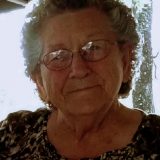 Funeral service for Emma Ruth Davidson, age 86, of Point, will be held on Thursday, July 13, 2017, 1:00 pm, at Wilson-Orwosky Funeral Home Chapel. With  Bro. Jason Rolen and Bro. Robert Burns officiating. Visitation will be held on Wednesday evening, from 6:00 – 8:00 pm, at the funeral home. Interment will follow funeral service in Salem Cemetery. Mrs. Davidson passed away Sunday night at her home.

She was born June 30, 1931, in Alba, to Bonnie Olen and Ema Geneva Flowers Morrow. She married Robert Davidson August 8, 1973, in Rockwall. During her working years, Ruth worked in restaurants.  She later owned and operatde of her own restaurant. Mrs. Davidson was of the Baptist faith.

Arrangements under the direction of Wilson-Orwosky Funeral Home.