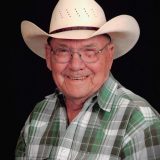 He was born on September 29, 1928 in Rison, AR, the son of Otis B. and Mae Reed Bell. He married Anna L. (Murdock) Bell on June 26, 1948 in Pine Bluff, AR. She preceded him in death on February 15, 1997.  He later married Wanda Tully (Grayson) Bell on December 5, 1998 in Sulphur Springs, TX. She preceded him in death on December 26, 2003. He was also preceded in death by special friend Hettie Armistead of Mesquite on December 16, 2013.  He was a member of the First United Methodist Church, Hopkins County Sheriff’s Posse, and Hopkins County Rodeo Committee. He owned and operated Bell’s Auto Glass and Trim for fifteen years then worked for Hopkins County Pct. 1 for ten years before retiring to follow his passion of horse trading.

In addition to his wives, he was also preceded in death by his parents, a sister, Hazel Bell Ollar, and brothers, Aubrey Faye Bell and Otis B. Bell Jr. Arrangements are under the direction of West Oaks Funeral Home.