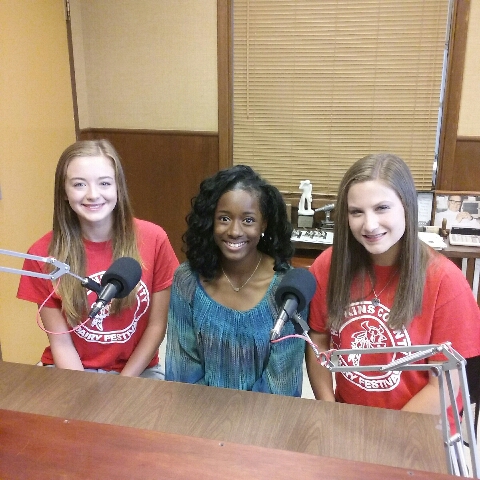 During the Morning Show with Enola Gay, audiences were treated to a visit from three of this year’s field of Hopkins County Dairy Festival contestants…Gracie Boyer, Imani Taylor and Peyton Deitze. All being Junior students at Sulphur Springs High School, the girls have another thing in common, all three are 2017/2018 Wildcat Varsity Cheerleaders. Each leads a physically active lifestyle and each plans to go to college with a career goal in mind. Let’s meet them!

Contestant # 3 Gracie Boyer is the daughter of Rudy and Christy Boyer. Her talent will be performing a song by Carrie Underwood “Temporary Home”. Her evening gown will be a sparkling blue. Gracie plans to pursue a degree in nursing. During her school career, she has earned UIL all-district recognition in soccer, and she also runs cross-country. In hobbies, Gracie is a certified US Soccer Federation Referee, and is a certified YMCA Lifeguard with a summer job at the SS Country Club.

Contestant #2 Imani Taylor is the daughter of Freddie and Rita Taylor. She will present a song and a lyrical dance as her talent. She selected a red gown for evening gown competition. Imani enjoys running, singing, dancing, gymnastics and competitive cheer. She has qualified for UIL State competitions in Triple and Long Jump, earned District honors in track and plays volleyball and basketball. Imani plans to attend Texas Tech University or UT Arlington to pursue a degree in nursing. She also hopes to compete in track and field or cheerleading on the the collegiate level.

Contestant # 4 Peyton Dietze is the daughter of Jason and Jill Dietze. You will see her at the pageant in a hot pink evening gown. For talent, she will perform a skit and dance entitled “The Evolution of Cheer”. She is a 5-year cheerleader in SSISD and co-captain for the 2017/2018 school year.  Peyton enjoys leadership at SSHS as Class President for 3 consecutive years, President of Key Club, President of National Honor Society, Secretary for National Technical Honor Society and is ranked #3 in SSHS Class of 2018.  With strong math skills, she plans to attend Baylor University to major in accounting.

During this week, we will meet all seven contestants plus have a visit from reigning Dairy Festival Queen Sadie Evans as they prepare for the Dairy Festival Queen’s Pageant and Coronation on Saturday June 17, 2017 in the SSHS Auditorium inside the Civic Center. Tickets at $7 each, available from contestants.