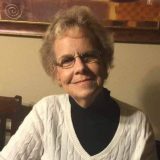 Shirley Chaffin Down Cork, 80, of Denton, Texas, went to be with the Lord on June 10, 2017. She was born in the Cypress community of East Texas before moving to Winnsboro where she attended Winnsboro High School before moving to Dallas with her family. She was a lifetime member of VFW Post 2205.

Shirley was preceded in death by her parents, Edgar and Pearl Chaffin, 13 brothers and sisters and husbands Kenneth Hicks, Les Cerny and Harold Down.