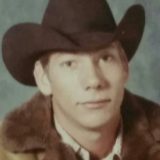 Rickey was born on January 6, 1955 in Commerce, TX, the son of Odis Henderson Vaughan and Velma Pauline Moore Vaughan.  He married Carla Maxine Hall on November 21, 1986 in Hugo, OK.  She Survives.  Rickey worked on road construction for many years and was also a rancher.

He was preceded in death by his parents, brother, Larry Vaughan and grandson, Carson Vaughan.