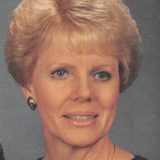 She was born in Detroit, MI on March 28, 1943, the daughter of Herbert Alvin Ford and Gladys Livesey West. She married Kenneth Moyle on December 16, 1998 in Visalia, CA, he survives. Joan was a homemaker. In addition to her husband she is survived by son Barry Rae of CA and son Kenneth Moyle and wife Lavania of Sulphur Springs, 9 grandchildren and many great-grandchildren.

She was preceded in death by her parents, son, Kenneth Wayne Rae, and one brother.

Services will be held at a later date.