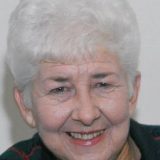 A family burial for Imozell Stuart was held on Wednesday, June 21, 2017, the day after her death, in the Stuart family area of Forbis Cemetery. Imozell D. Stuart, age 80, of Emory, passed away on Tuesday, June 20, 2017, in Dallas, at Texas Health Resources (Presbyterian Hospital). She was born April 26, 1937, in Point, to Andrew Thomas and Rosa Jobe.
She was a graduate of Point High School in the Class of 1955. Imozell married Allen Lee “Cobb” Stuart, June 18, 1955.  They were married for some 53 years. During her working years, she worked twenty-plus years as a legal secretary for LM “Bunker” Braziel.  She was former co-owner of Stuart’s Tree Service.  Along with these other jobs, Imozell also was a cattle rancher with her husband, daughter, and son-in-law. She was of the Baptist faith.
Survivors include:
Son:  Ray Stuart of Emory;
Daughter:  Kay Player (Ken) of Emory;
Brothers:  Melvin Jobe (Lynne) of Arlington; and, Troy Jobe (Norma) of Point;
Sister:  Margie Romine (Ted) of Point;
Faithful little dog:  Gizmo;
Numerous other loving family and friends;
Preceded in death by :  Parents; Husband, in 2008;
Sister:  Martha Butler; Brother, Bobby Jobe; and, Infant brother, Louie Ray Jobe;
In lieu of flowers, family wishes donations be made to:
Forbis Cemetery “Fence Fund”
P.O. Box  100
Emory, TX  75440.
Burial arrangements were under the direction of Wilson-Orwosky Funeral Home.