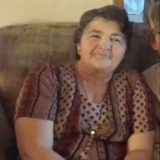 Graveside services for Diane Marie Lyons, age 67, have been scheduled for Thursday, June 15, 2017 at 3:00pm at Yantis Cemetery with Rev. Craig Vance officiating.  Serving as pallbearers will be Gage Wood, Blake Wood, Jerry Watson, Shane Watson, James Venable, Travis Sanders and Robert Winchester.  A visitation will be held prior to the service from 12:30 to 2:30 at Tapp Funeral Home.  Diane passed away at her home in Yantis on Monday, June 12, 2017.

Diane Marie (Wood) Lyons was born on January 26, 1950, in Richmond, Indiana, the daughter of Victor Bruce Wood and Esther Marie (Pease) Wood.  She married Roger Lyons on August 7, 1971 in Dayton, Ohio.  Diane was retired from Burger King where she was the manager and she attended the First Baptist Church in Yantis.

Mrs. Lyons was preceded in death by: parents; a grandchild: Joseph Lee Winchester.