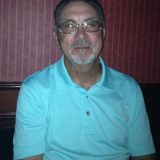 He was born on March 27, 1948 in Sulphur Springs, the son of Earl Sterling Brown and Louise Watson Brown.  He married Brenda Hatcher on May 28, 1977 in Hugo, OK.  She survives. Cletius served in the United States Army during the Vietnam war and was later a professional truck driver.

He was preceded in death by his parents, brother, Earl Brown, Jr., sister, Sheena Parnell, and step-dad, Farrah “Buddy” Parnell.