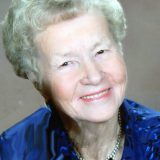 Mrs. Annie Ruth Barber, age 92 of Leesburg, passed away on Wednesday, June 7th, 2017 in Dangerfield. She was born on January 30th, 1925 in Upshur County to the late Era Nelson and Bessie Hallonquist Nelson. Annie grew up in Upshur County and the Pinney Grove area. She married Elvis Barber on June 6, 1942 in Pinney Grove.
Mrs. Barber was a homemaker and a member of Pine Street Baptist Church in Winnsboro.