The Wildcats’ baseball team hung on by their fingernails to win a pulse-pounding game two against North Forney, 5-4 Saturday at Eagle Stadium, to wrap up their bi-district series.

The Wildcats entered the top of the seventh inning up 5-3. Pitcher Triston McCormick retired the first batter in the inning on a ground ball. Then things got interesting. The Falcons got back to back hits. They loaded the bases as the Wildcats went for a force play at second on a ground ball but an umpire said a Wildcats ‘ infielder was not on the bag when he caught the ball. McCormick hit a batter forcing in a run to make it 5-4.

Wildcats Coach Jerrod Hammack brought in reliever Tyler Armstrong to face the Falcons clean up batter. On his first pitch, the batter hit into a game ending double play. McCormick got the pitching win going six and one-third innings allowing seven hits and four runs with two walks and five strikeouts. Armstrong earned a one-pitch save.

The Falcons jumped out to a 1-0 lead in the top of the first inning. The Wildcats took the lead with two runs in the bottom of the second. Ryan Humphries doubled and Ryder Caddell walked. Michael Arnold and Dawson Draper both drove in runs with ground outs. North Forney scored in their half of the third to tie the score at 2-2. In the bottom of the third, the Wildcats scored two runs to go up 4-2. Mason Buck walked and eventually scored on a wild pitch. Heston Golightly hit a long home run over the left field wall. The Wildcats missed a couple of golden opportunities to get way ahead. They had the bases loaded in the fourth and fifth innings but could not score. North Forney scored a run in the top of the fifth to narrow the gap to 4-3. The Wildcats scored the eventual winning run in the bottom of the sixth. Dawson Draper singled. Easton Silman put down a bunt and the Falcons pitcher threw wildly to first. Runners were on second and third. Buck drove home a run with a sacrifice fly and the Wildcats went up 5-3 setting the stage for the late drama.

The Wildcats will now face Frisco Wakeland, one of the state’s best teams, in area competition. Coach Hammack is working on details. With the Saturday win, the Wildcats improved their season record to 18-8-2. 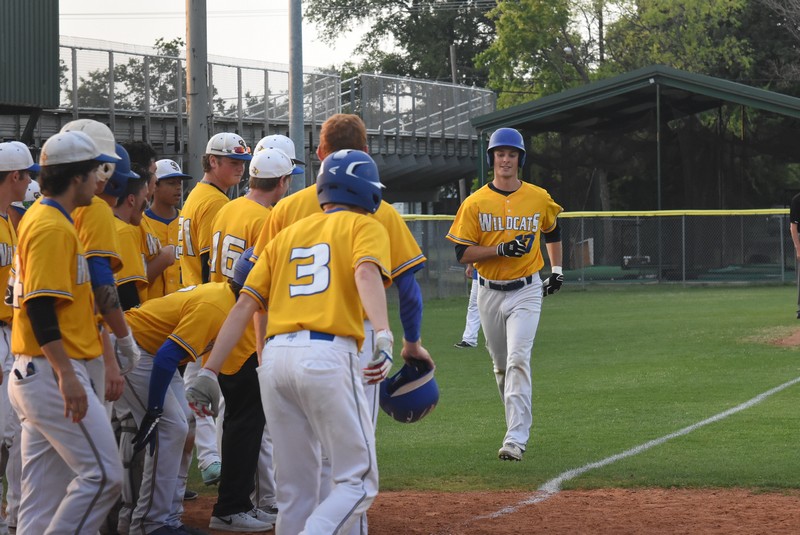